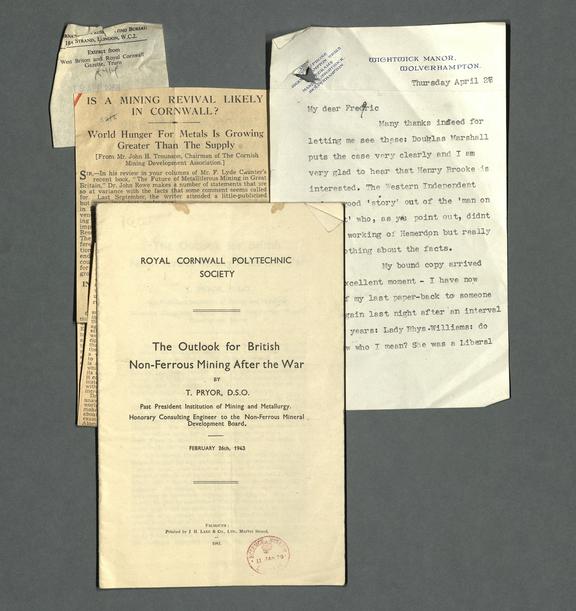 The collection is dated c.1932-1956 and comprises one box containing newspaper cuttings, letters, articles, and pamphlets relating to the history and contemporary state of tin mining in South-West England and the writing, publication and publicising of Frederic Lyde Caunter’s book, ‘The future of metalliferous mining in Great Britain, with special reference to tin and tungsten, and a suggestion for saving dollar’ (Liskeard, 1956).

There is 1 folder comprising press cuttings (c.70 items), letters (3 items) and journal articles (4 items). The press cuttings relate to tin mining in Cornwall and the South West and to the publication and publicising of Caunter’s book. Several press cuttings are particularly concerned with the re-opening of Hemerdon Mine in Devon. Of the 3 letters, the first (February 1946) was sent by Caunter to Lieutenant-Commander P. G. Agnew regarding the setting up of a state commission to foster the metal mining industry. The second (July 1951) was sent by N. K. Kitto, general secretary of the Cornish Mining Development Association, to Caunter and includes 2 attached typescripts, ‘General observations on the taxation of the metal mining industry of Great Britain’ and ‘Submissions to the Royal Commission on the taxation of profits and income’, both by the Cornish Mining Development Association. The third (April 1956) is a letter from Caunter to the editor of the South Devon Times concerning Hemerdon Mine in Devon. There are additionally 4 articles, ‘Cornwall’s Mines and Miners’ by A. K. Hamilton Jenkin taken from The Geographical Magazine (March 1937); ‘Cornish tin could help to replace Malayan losses’ by A. K. Hamilton Jenkin taken from The Picture Post (February 1942); ‘The Cornish Mineral Industry: The St Just and St Ives Mining Districts’, by John H. Trounson, taken from The Mining Magazine (September 1942); and an editorial from The Mining Magazine (May 1956).

The remainder of the collection comprises a bundle of letters [c.220 items] and news cuttings [5 items] mainly concerned with the writing, publication and publicising of Caunter’s book. There is additionally 1 pamphlet, ‘The Outlook for British Non-Ferrous Mining After the War’ by T. Pryor (Falmouth, 1943); a copy of Caunter’s ‘The future of metalliferous mining in Great Britain, with special reference to tin and tungsten, and a suggestion for saving dollars’ [undated] to which a number of newspaper reviews of the book have been affixed; and a memorandum from the Cornish Tin Mining Advisory Committee, ‘Post War Reconstruction: Cornish Metalliferous Mining’ (1944) which includes 2 unsigned sheets of handwritten comments. Finally, there is a file containing 2 typescripts, the first being F. J. Stephen’s paper to the Royal Cornwall Polytechnic Society of Geology, ‘Minerals and Mines of the Liskeard District’ (1932) and the second being Caunter’s ‘General Notes on the Cornish Mining Industry’ (undated).

System of Arrangement:
The collection has not been archivally arranged and described. There is no retrieval system and it appears to be a collection.