Records of the British Society for International Bibliography 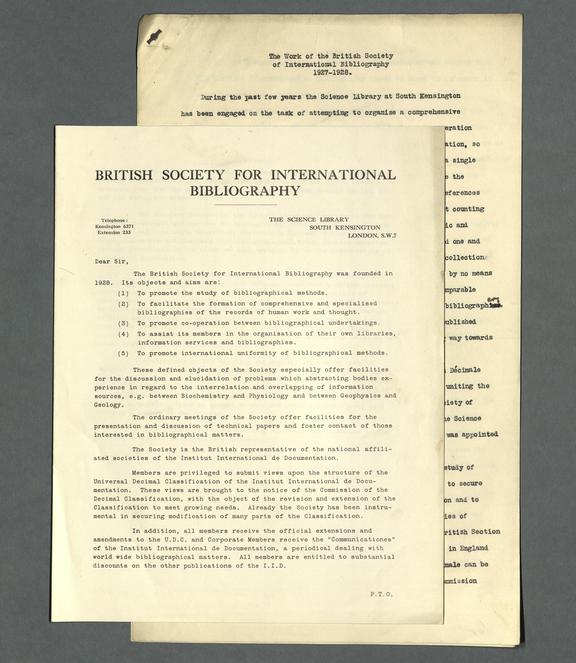 The collection comprises nine series in two boxes. Series 1 comprises papers, chiefly in French, relating to the Congrès Mondial de la Documentation Universelle, or World Congress of Universal Documentation [1937]. Series 2 comprises minutes and correspondence of the BSIB and Aslib joint committee [1930-1935], and includes discussion of the advantages of the UDC system. Series 3 comprises committee minutes, lists of members, annual reports and accounts of the BSIB [1927-1932] as well as an account of its work in its first year (1927-1928).

Series 5 comprises committee minutes, annual reports, accounts and correspondence of the BSIB together with a list of British societies and their publications and several circulars advertising new reprographic methods [1935-1937]. Series 6 comprises correspondence with various British societies together with a list of ‘scientific themed societies’ [1929-1930,1935]. Series 7 comprises papers and correspondence in English and French relating to the Union Internationale de la Chimie Pure et Appliquée [1922-1932]. Series 8 comprises an article entitled ‘The problems of international bibliography from the point of view of a specialised bibliography’ by Sigmund von Frauendorfer [1929], a memorandum on international abstracting and classifying of scientific and technical literature [1930], and a bulletin of the Société de Chimie Industrielle [1930]. Series 9 comprises six files of correspondence relating to the BSIB (1930-1932].

System of Arrangement:
The files were grouped in 9 series numbered alpha numerically, according to subject areas. Original numbering sequences, where evident, were maintained in the order of the files. Where no such sequences were evident, the order was decided by the archivist.