Drawings of industrial sites and machine tools including one thought to be based on the Liverpool Road Railway station drawn c1830. 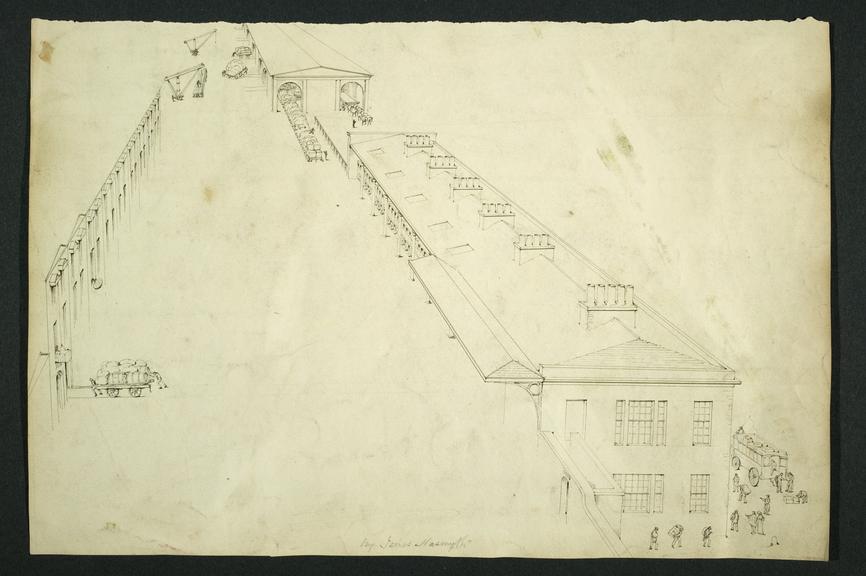 The most significant of the four drawings is thought to be based on the Liverpool Road Railway station drawn, perhaps from memory, around the time of its opening in 1830. It is known that James Nasmyth visited Manchester at this time to see the Liverpool to Manchester Railway and sketched as he travelled. The sketch is more of an impression of what he saw, rather than a detailed and faithful representation of the site as there are several key architectural discrepancies.

The view of an Edinburgh street scene is very similar to examples held in Edinburgh, where Nasmyth was born and where he father worked as a professional artist.

The sketch of a machine tool shows a nut cutting and facing machine known to have been produced by James Nasmyth's engineering works in Patricroft.

The sketch of Orrell's Mill, Stockport (c1835) is thought to be by Alexander Nasmyth, father of James. He has a distinctively rectilinear style which he used to create street-scenes of Edinburgh and are also too be found in his illustrations in the Samuel Smiles biography of James Nasmyth.