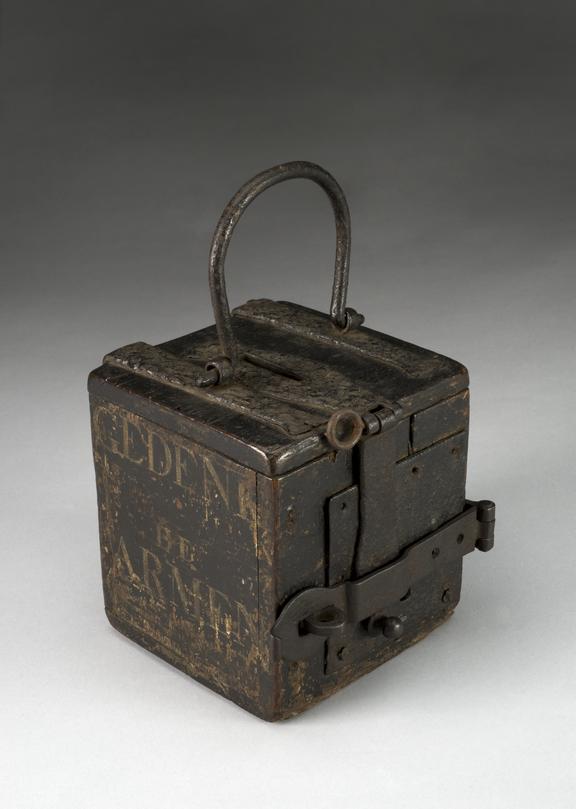 Ever taken part in a hospital fundraising event? A charity coffee morning to raise money for the special care baby unit or the latest scanner? Collecting money for the local hospital has a long tradition, dating back to at least the medieval period. But it’s unlikely they did a fancy dress fun run in those days, so how did they raise money?

Most donations were put directly in an alms box. For Christians it was considered a religious duty to call at the door of a hospital and ‘give alms’, meaning charity. The inscription on this box reads ”Think of the poor” in Dutch, reminding visitors of the hospital’s duty to give care to the poor. Alms boxes needed to be eye-catching, but few were as impressive as those outside Bethlem Royal Hospital in London – male and female figures, almost life-size, carrying collecting jars.

Hospitals were not the only place you’d find an alms box. Where else would be a good spot for collecting money from large numbers of people? Pubs and churches were popular locations, and some hospitals had hundreds of boxes dotted around the local area. The box had to be theft-proof, so could be built into walls and pillars, and secured with many locks, their keys held by different officials. Boxes were opened once a month and the funds handed over to a hospital secretary.

Like today, donations were an important and valued part of hospital income. So the next time you see someone in an oversize teddy bear costume, collecting money for your local hospital or hospice, think of the long tradition to which they belong and give them some money.