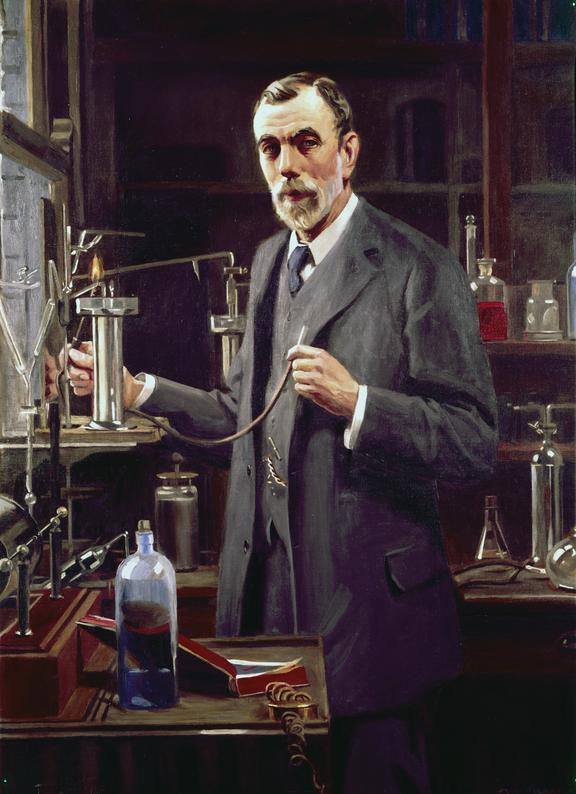 Painting. [William Ramsay] / by Mark Milbanke, 1913. Oil on canvas; 140 x 105 cm in glazed frame 166 x 131 x 10 cm. Signed and dated, br. An oil portrait of Ramsay in his laboratory was commissioned from the artist in 1912, and presented to University College London as a tribute to his distinguished work upon his retirement from the Chair of Chemistry. This replica, also commissioned, was presented to Lady Ramsay on that occasion. It was presented to the Science Museum by their daughter, Lady Tidy, upon the Ramsay centenary celebrations in 1952. Portrait, TQL looking L, of Ramsay working at his laboratory benches surrounded by the glass apparatus used throughout his researches on rare gases; chemical apparatus

Possibly the most astonishing incident in the whole history of the discovery of the elements is the revelation by Sir William Ramsay and Lord Rayleigh that there existed in the atmosphere a family of gases, constituting a whole group of the Periodic Table, the existence of which had been totally unsuspected. It is now realised that Henry Cavendish had probably isolated argon from air (in 1785) but had supposed it to be a residual bubble of nitrogen. Rayleigh and Ramsay, working separately on the properties of nitrogen, found anomalous results, collaborated, and isolated a gas which was so chemically inert that they called it argon (the lazy one). Neon, Krypton and xenon were isolated soon after. Then helium, which had been detected spectroscopically in the sun in 1868, was found in cleveite (a rare mineral).

The last member of the group, radon, was discovered by Rutherford and Soddy in 1900 as a product of radioactive decay in radium.