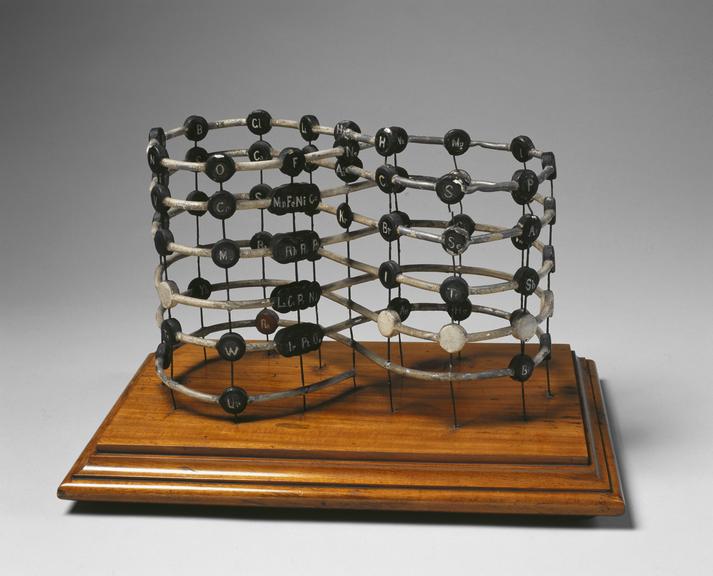 Periodic table model, in spiral form, made by Sir William Crookes, representing the order of evolution of the elements, 1888.

In 1886 William Crookes, who worked across chemistry and physics, described a new kind of periodic table, which took the form of a zig-zag. It showed not only chemical relationship between the elements, like other periodic tables before, but also the order of their evolution from what he believed to be primal matter within stars. As this hot plasma state of matter cooled, according to Crookes' theory, the elements evolved from the lightest, hrydrogen, to the heaviest, which at that time was uranium. Crookes was one of the first to put forward an evolutonary theory of the elements.

Crookes modified his zig-zag periodic system into a three-dimensional double spiral model. He exhibited it at the Chemical Society in London in 1888. 10 years later, he added the recently-discovered Nobel gases, persuading Russian chemist Dmitri Mendeleev to accommodate these elements in his celebrated periodic table. Crookes also added Radium on a red disk, which was discovered by Marie and Pierre Curie in 1898. As Crookes worked with radioactive elements himself, the model remains mildly-radioactive as a result.