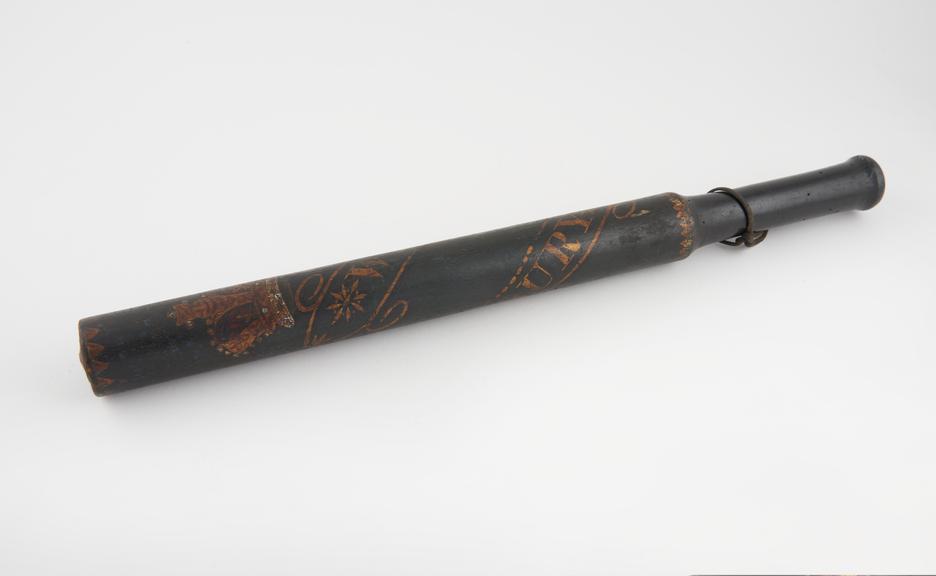 Police truncheons, or batons, of the past could be highly decorated. They were painted to denote local constabulary, Royal cyphers, local crests and sometimes even the police officer’s rank. The variation in decoration and design of these truncheons is vast, and although the details were supposed to be removed once the truncheon ceased to be used, they are easy to find intact on online auction sites. These inscriptions can provide a history of the British police force on a local level, especially when the designs provide unusual level of detail.

This truncheon is decorated with a Royal cypher which demonstrated the officer’s authority, acting similarly to how a modern warrant card does. ‘Whitsbury’ is beautifully painted around the baton, a small parish village in Hampshire which the police officer who owned this truncheon would have patrolled. This suggests that police officers were assigned on a more local level than today, with villages having designated patrolling officers instead of forces operating over a more widespread area. This design is simple compared to some truncheons. The most ornate designs were reserved for those belonging to tipstaffs, which are often topped with a removable crown. An example of this can be found under object number 1976-7965.

A tipstaff refers to both a type of truncheon and the job title of a specific court official who has a variety of roles, mainly related to keeping order within court. The word is a shortening of the phrase ‘tipped staff’, which was a metal tipped staff carried as an emblem of office by certain individuals within the police and courts, dating back to the 1560s. The word eventually became synonymous with the job, so its two meanings have become interchangeable over time whilst the role evolved. The job still exists in various places across the world today, with a Deputy Tipstaff role advertised by the UK’s Ministry of Justice in late 2019. The job description referred to it as ‘the oldest Law Enforcement post in the jurisdiction of England and Wales’, dating to the 13th Century.