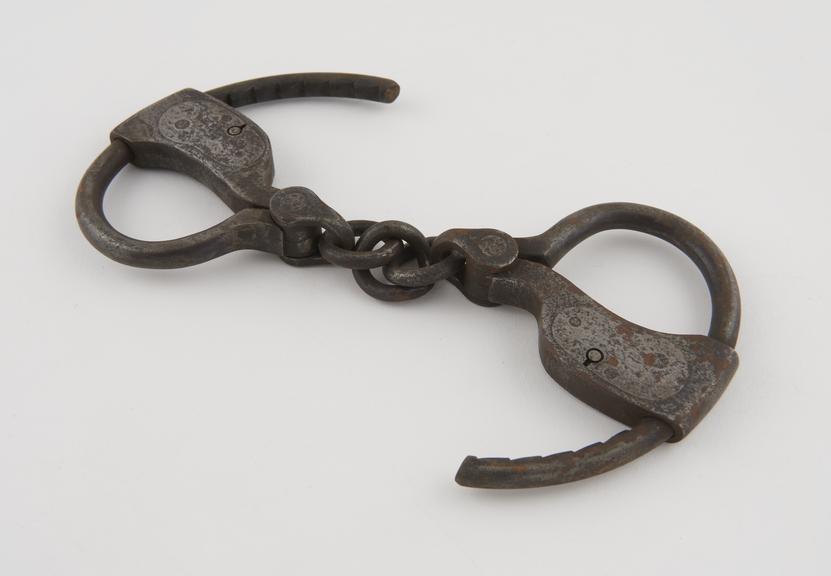 Handcuffs are almost synonymous with modern punishment, but they are not a modern invention. The first recorded mention of wrist restraint is in Greek mythology: in Virgil’s poetry from 70BC where he discusses preventing Proteus from shape shifting. The earliest metal handcuff examples date from the Bronze and Iron ages, and there have been many different designs throughout the years, with over 3000 search results coming up for handcuffs since 1860 on the European patent office’s website.

John J Tower’s handcuff design was an advancement on two existing patented handcuff designs: Adam’s ratchet handcuffs and Phelps’s development upon Adam’s design. Tower began producing his handcuffs in 1865 under licence of these patents, but upon the death of the previous patent owners, he was able to purchase the patent in 1877. He designed many adaptations in attempts to counteract the ability to escape due to their adjustable nature. One of his more unusual designs was a 3-person handcuff that was identical to the design of these handcuffs, but with 3 wrist restraints instead of 2.

This design has 5 patent dates inscribed on it up to December 1882, which allows us to narrow down the design of the handcuffs. Tower patented a ‘double lock’ design in 1879, which was his most successful attempt at reducing the possibility of escape due to the inclusion of 2 lock settings and a tightening of the fit of the cuff’s closing mechanism, which prevented the possibility of the prisoner shimmying their way out of the cuffs through the gap.

Tower had competition in the designing of handcuffs. E. D. Bean submitted a patent in September 1882 with a stop included within the lock mechanism to prevent ‘premature or accidental’ locking. Tower very quickly applied for a patent, mentioning in the specification that other ‘efforts’ to include a stop were ‘unreliable’, stating that it could be ‘operated by the prisoner’ and therefore is ‘useless for the purpose intended’. Since Tower submitted this application 5 days after Bean, it is possible that these statements were in direct response to Bean’s design! The inclusion of an 1882 patent date on these handcuffs suggest they could be an example of Tower’s reactive patent, but it is not possible to check for the inclusion of a stop mechanism.

Tower’s designs were popular in America - arguably dominating the handcuff business as an industry standard – until George Carney’s patented ‘swing cuff’ design took hold in 1812. Carney’s design remains the most common design until this day.