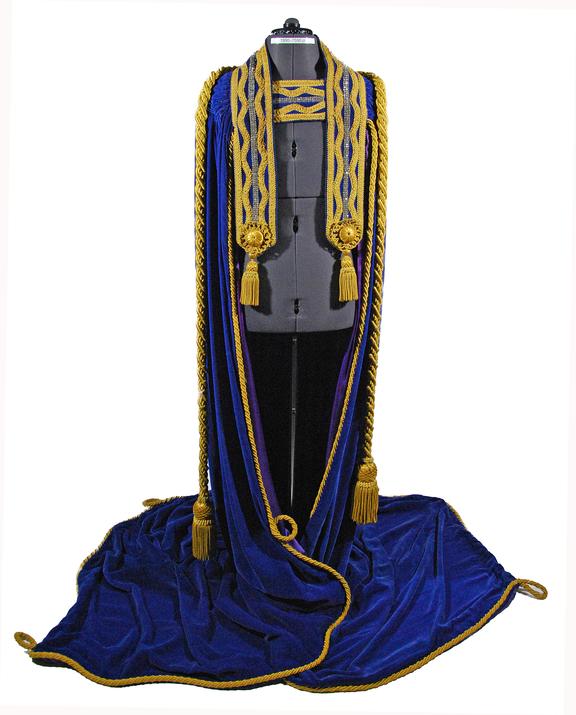 This luxuriously trimmed gown formed part of the Railway Queen's regalia and was accompanied by a tiara and chain of office, examples of which are also in the Science Museum Group's Collection.

The role of the Railway Queen had come into being with the centenary celebrations of the Stockton & Darlington Railway, taking place at the Railway Carnival at Belle Vue, Manchester. The Carnival was open to all railway workers and their families and the main attraction was the crowning of the Railway Queen.

This competition was open to all teenage daughters of railway workers, who submitted a photograph of themselves from which pool a winner was picked; she would become that year’s Railway Queen. The first Railway Queen was Helena (Ella) Wotton, the daughter of a Great Western Railway Employee.

The role of the Railway Queen was to act as a representative of the railway industry and to foster goodwill between companies and Trade Unions. Tensions had been high due to a series of strikes which had been called in recent years and the Railway Carnival was seen as a way to engage railway workers and their families and promote a positive relationship between the railway companies and their employees. The Railway Queen ceremony survived until the 1970s, by which time society and transport in the UK had changed considerably and attendance at the Railway Carnival was dwindling.

In hindsight it was an extraordinary task to lay upon the shoulders of a teenage girl. On the one hand intended to be a ceremonial figurehead aesthetically and virtuously appealing, and on the other a public relations maestro capable of bringing together disparate voices both nationally and internationally. Indeed, one Railway Queen, Audrey Mossom (‘crowned’ 1935) visited the USSR as part of her duties and had an audience with Josef Stalin.

Measurements:
overall-Depends on how it is mounted and displayed for complete meaurements: 2600 mm x 2500 mm x 1900 mm,