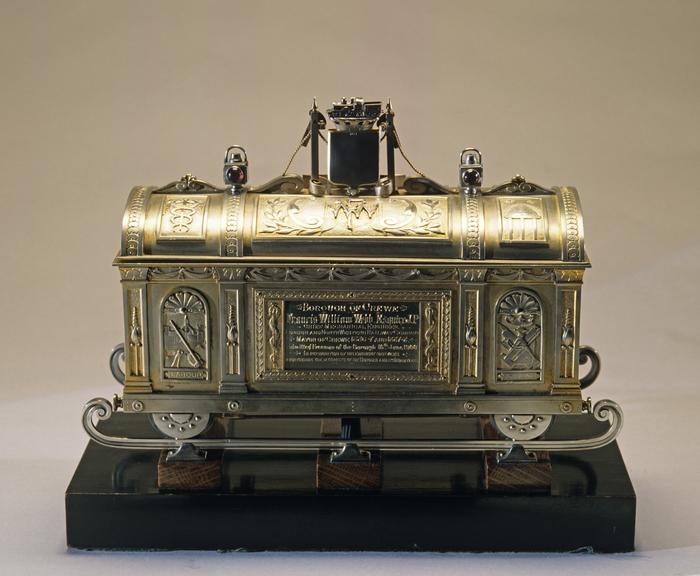 Casket presented to Francis William Webb - 1900.
Science Museum Group Collection
© The Board of Trustees of the Science Museum

Casket, in the shape of a railway carriage, decorated with railway lamps, signals, engines and enamel plaques depicting buildings in Crewe, silk lined and padded interior contains illuminated address, presented to Francis William Webb by the Borough of Crewe on granting him the Freedom of the Borough.

This casket, with an illuminated address, was presented to F W Webb, Chief Mechanical Engineer of the London & North Western Railway, on the occasion of his election as Freeman of the Borough of Crewe on 16 June 1900. In that year the population of Crewe was approximately 40,000, of whom 18,000 were employed at the L&NWR’s Crewe factories.

The casket is in the form of a railway carriage decorated with allegorical motifs, depicting Science, Labour, Industry (the beehives) and Speed (the caduceus, symbol of the Greek messenger god Hermes). On the lid is the coat-of-arms of Crewe, Webb’s crest, and his initials superimposed on a spider’s web – an obvious pun. Enamel panels of notable Crewe buildings including Webb’s house, and engravings of Stephenson’s Rocket and a Webb ‘Jubilee’ class locomotive, complete the decoration.