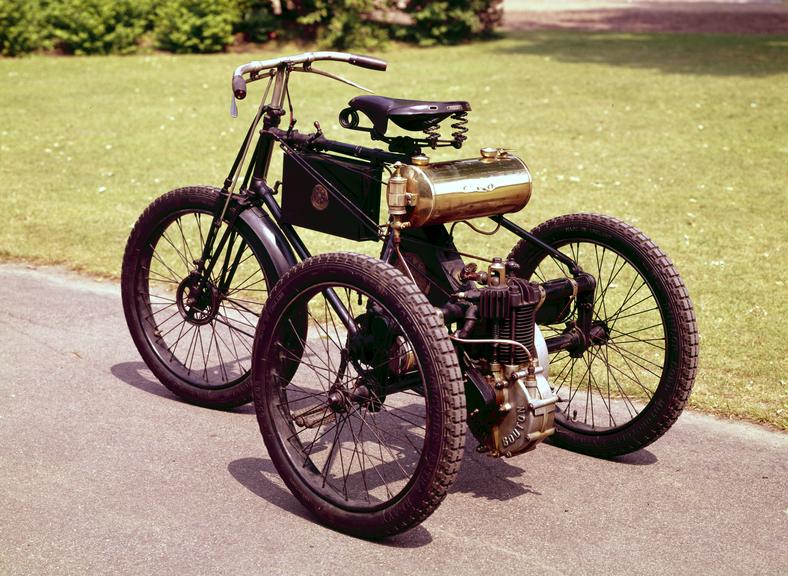 De Dion Bouton motor tricycle, by the Motor Manufacturing Co. Coventry, 1898. This tricycle is a copy of the French machines which embodied improvements patented by Count Albert De Dion and Charles Bouton in 1895. A vertical single-cylinder air-cooled engine is mounted behind the rear axle which it drives through spur gearing.

This motor tricycle was designed by two Frenchman, Count Albert De Dion and Charles Bouton. Quite a number were built and one of them ran in the famous 1899 Paris to Bordeaux race at an average speed of 28 miles an hour.

Quite a lot of physical effort was needed to pedal-start these tricycles, but once going well on a reasonably flat road they were capable of cruising at a speed of about 20 miles an hour, which was quite fast for a nineteenth-century road vehicle. Cornering a motor tricycle necessitated some skill, particularly on the bad road surfaces of the period, but the ability to manoeuvre was assisted by the differential gear located in the tricycle's rear axle. No clutch was provided.

Following the invention by Gottlieb Daimler in 1885 of the surface vaporiser for supplying an ignitable air-petrol mixture, various specialised types were evolved for both cars and motor cycles. The example shown is one of the best known of this period, and was used extensively on the De Dion motor tricycle.

The sheet metal petrol container has an air inlet tube with a slidable horizontal baffle by means of which the incoming air, induced by the suction of the engine, is directed over the surface of the petrol. The resulting air-petrol vapour flows through the cylindrical mixing chamber and is controlled by a barrel throttle; a second barrel throttle admits extra air. The mixing chamber is connected to the inlet port of the engine by a pipe. A small pipe connecting with the exhaust pipe passes through the petrol in the container to assist vaporisation. A float with a long wire indicator shows the quantity of petrol in the container.