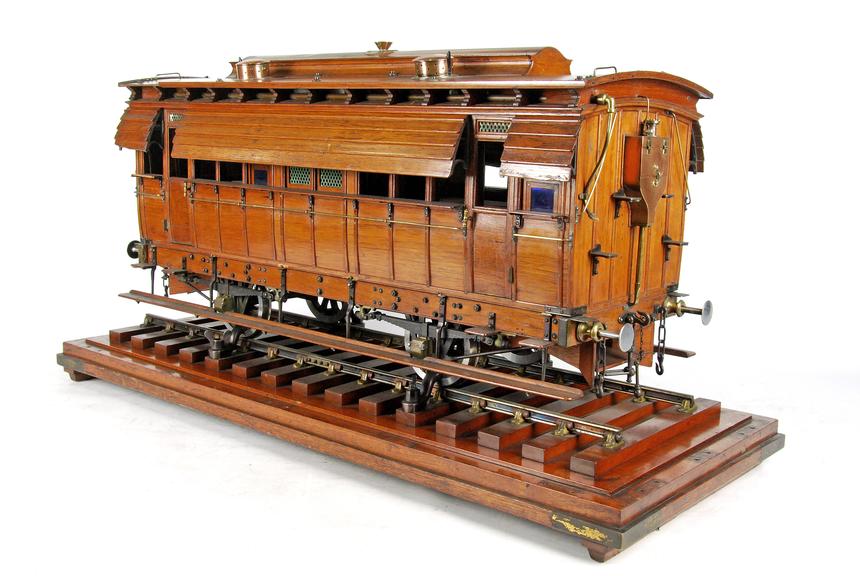 This model carriage represents a passenger carriage fitted with special air cooling and ventilation arrangements for use on railways in hot climates. Designed by R D Sanders, Deputy Locomotive Superintendent of the Great Indian Peninsular Railway, in 1871, the cooling was achieved by drawing air over cloths kept constantly wet.

Beneath the carriage at each end was a wooden trunk by which air entered, and the bottom of this was pivoted in the middle, forming a flap door which automatically opened so as to face the direction in which the train was travelling.

In the upper part of the trunk, and below a grating in the carriage floor, layers of cloth were supported on iron bars and arranged that the air passed between the layers. Water was sprinkled over the cloth by pipes which received an intermittent supply from a small pivoted tank which was fitted on the end of the carriage. This small tank was filled by a larger tank on the roof.

The carriage was built entirely of teak and ran on four wheels of 3.5ft diameter. Fixed wooden blinds were provided over the windows, and four lamps in the roof. Fifty carriages were fitted with this cooling arrangement.