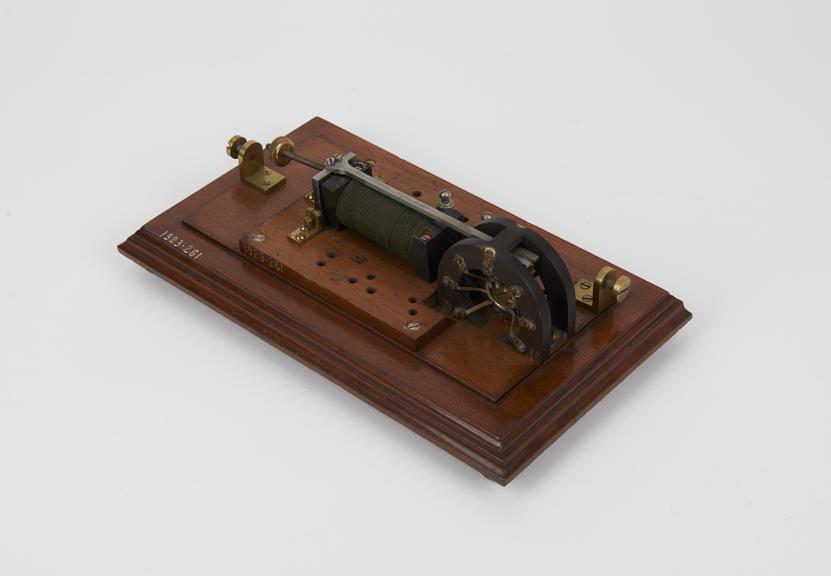 An Electrophone table was used for receiving concerts and other public events from theatres, churches, etc, which were wired up with Electrophone microphones. The table had connexions for up to six headsets and the lid is removable via a wing nut under the table top base showing connection numbers.

The idea of the electrophone broadcast service originated in continental Europe around 1890, with the Telephone Herald in Budapest which allowed subscribers to dial in for news and in in Paris where the Théâtrephone provided live entertainment by telephone.

The Electrophone telephone broadcast service came to the UK shortly afterwards in the mid-1890s – the Electrophone Company was founded in London in November 1894 and began offering a public service the following year in 1895, “broadcasting” news, entertainment and church services over the lines of the National Telephone Company. By 1908, subscribers to the Electrophone service reached 800.

Transmitters in the venues were routed through the Electrophone exchange and on to subscribers, listening to the requested performance by means of headphones. The Electrophone company also provided these listening posts for rental in public areas, which meant that customers didn't need a telephone at home to be able to enjoy the entertainment. As such, electrophone tables were found in gentlemen's club and salon as well as the domestic sphere (where this example most likely was used). The multi-headset tables made the electrophone a shared entertainment experience for friends and family – or those who could afford it. Public electrophones could be paid for with a coin slot (so a “pay as you go service”) while domestic sets (such as this one) would have required a subscription of about £5, a not inconsiderable cost which covered the high line rental prices paid by the Electrophone Company to the National Telephone Company.

As ‘free to air’ broadcast radio become more popular in the UK with the foundation of the BBC in 1922, the electrophone subscription service decreased in numbers popularity and electrophone service ceased in London in about 1925 but lingered on in Bournemouth until the mid-1930s.