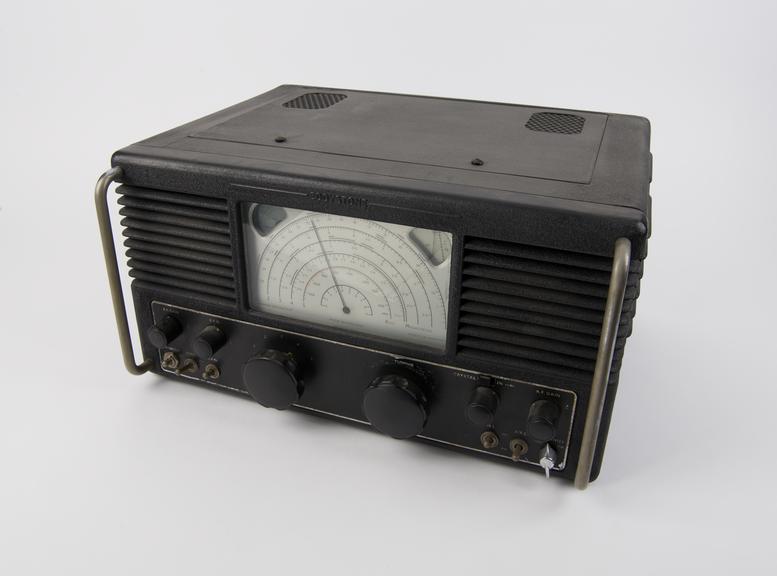 Eddystone' 680/2A communications receiver; Stratton and Co, Birmingham 1955'
Science Museum Group
© The Board of Trustees of the Science Museum

The Eddystone “680” communications receiver was a high-grade radio communications receiver with wide frequency coverage intended for professional and amateur radio use. The basic circuit was a fifteen-valve superheterodyne (including rectifier and stabiliser) and the majority of the valves were of the all-glass type, selected to ensure maximum performance and an excellent signal-to-noise ratio.

The Eddystone “680” was first announced at the 1947 Radiolympia Show as the successor to the “Eddystone” S.504, using the latest range of miniature valves. Unfortunately, the set ran a little too warm and so the design was returned to the drawing board and a new version was released in 1949, sometimes referred to as the “new 680” or the “680/2” although it was never marketed as this. The 1949 680 incorporating several design features which improved performance, reliability and cooling. New features included a deeper cabinet and cooling louvres, together with a headphone jack at the left-hand side of the case.

The 680/2 was considered “Stratton’s most serious post-war product yet” and sold for about £85 in the This Eddystone 680/2A was a special model produced for the New Zealand Broadcasting Corporation (NZBC) with different connectors at the rear.

Eddystone Radio started life as Stratton and Laughton a subsidiary of Rainsford and Laughton, Birmingham fancy goods manufacturers, in 1925. Radio sets were made in what came to be known as the Eddystone Works at Birmingham, England.