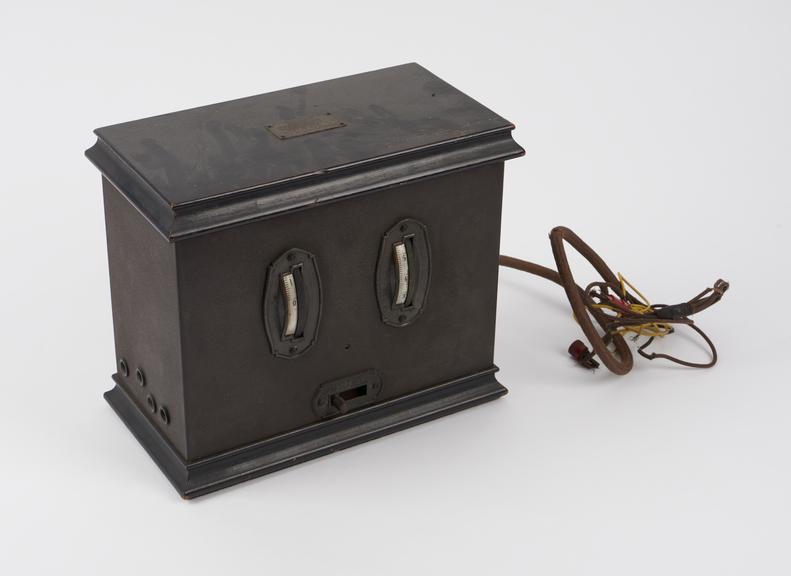 Gecophone victor 3 broadcast receiver, c. 1927
Science Museum Group
© The Board of Trustees of the Science Museum

The 3-valve circuit comprised a detector(with Reinartz reaction) and two resistance-capacity coupled audio stages, the lineup being two DEH210 and a DEP215. Solid dielectric tuning and reaction condensers, the absence of transformers and the method of construction, resulted in a highly compact receiver measuring housed in a crystal-finished metal box with base and hinged top, c. ebonised wood. The set was also unusual at its time for having three separate switched tuning-ranges, enabling giving continuous tuning from 200 to 2,000m.

The Gecophone Victor Three was a landmark in the production engineering of the British domestic wireless set. It was announced in the popular electronic periodical “Wireless World” on 19 September 1928 in a forecast of the outstanding exhibits in the 1928 Olympia Show, and a week later Wireless World described it as “the gem of the Gecophone collection.”

The set also marked a transition for engineering and manufacturing of British domestic radio sets, from the traditional hand assembled highly finished components commonly produced in the UK at the time through to mass manufactured sets as was more common in the USA and Germany in the mid/late 1920s. The Gecophone Victor Three used a more integrated and mass-produced form of construction – made from copper strip rivetted to a Paxoline sheet with almost none of the parts being independently available.

The Gecophone Victor Three was only on sale for a limited time, from 1928 through to 1929/1930 – it did not appear in the 1930 Buyers’ Guide. The Gecophone Victor Three, complete with valves and batteries sold for £8 10s, a competitive price for a three-valve domestic wireless set but still more than two weeks’ average wages in the UK at the time.