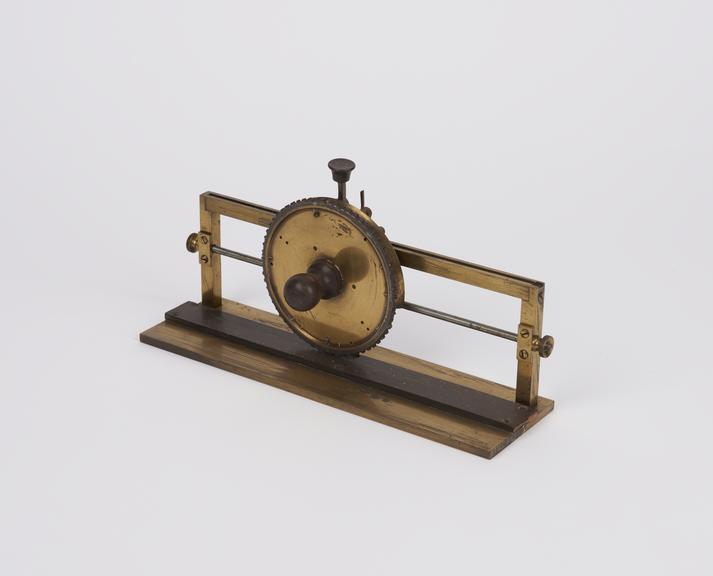 The plane of the typewheel is parallel with the line of type and the typewheel, with the spacing mechanism and inking roller, are carried on a horizontal bar which has a rack cut upon its upper surface. The wheel is rotated by an ebonite knob until a pointer on the back of the wheel indicates on a stationary arc behind it that the desired letter is in position. The knob is depressed and the typewheel moved vertically downwards on to the paper. A vertical rod with a small roller working on a cam is depressed; a pawl engages with the rack and the typewheel assembly is moved forwards.

Inking is by means of a small roller pad which moves up under the typewheel when the latter is raised and moves back when it is depressed. The paper passes over a strip of ebonite on the brass backplate and there is no evidence of any holding mechanism; the paper may have been held by clips to the baseplate.

This simple typewheel typewriter is said to have been made by John Cox.

This typewheel typewriter is said to have been made by John Cox of Gorgie Mills, Edinburgh. Cox was a glue maker and prolific inventor – other inventions a new type of gelatine in 1844 later used in photography and various exercise machines used at the Royal Patent Gymnasium opened in Edinburgh in 1865.

Though very basic in design, nonetheless it was an early example of an index-style writing machine and was one of the few primarily brass typewriters to have ever been made. Michael Adler’s “From Creed to QWERTY” (1997) described Cox’s typewheel typewriter as “a primitive device … its sole claim to fame is that it was a forerunner of several later cheap machines such as the Herrington and [Robert Hawley Ingersoll’s 1892 Dollar typewriter].”