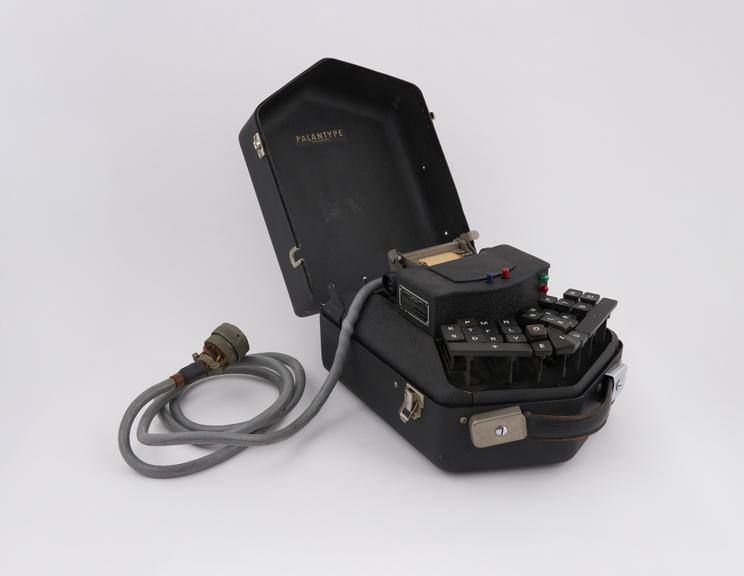 The “Palantype” was a British patented stenograph machine used to mechanically record speech in real time by an operator (referred to as a “Palantypist” or more commonly a stenographer) using a specialised keyboard with 29 keys. Speech was recorded on the machine syllable by syllable by the operator pressing a number of keys simultaneously for each syllable. This simultaneous stroking of several keys was called a “chord”. The “chord” produced a coded phonetic form (a form of shorthand) printed out as text line by line onto a paper roll.

This Palantype Transcription Unit was developed by the Department of Electronics at the University of Southampton for use in the House of Commons by MP Jack Ashley. It was based on digital logic and remained in service until late 1979 when it was replaced by a unit based on a microprocessor.

The Palantype mechanical method of recording speech was by far the fastest (180-200 words per minute) known - exceeding other stenographic systems (shorthand) and able to operate at the rate of regular speech. The Palantype was used for commercial and court room speech transcription; as communication and rehabilitation systems for the sight impaired, speech impaired and hearing impaired; and could even be used to record foreign language even if the operator was unfamiliar with that language.

The Palantype machine was adapted from the French Grandjean stenotype machine, first introduced in 1910, to produce a shorthand machine more suitable for the English language. Production of Palantype machines began in the UK in 1946 and continued until the late 1960s.

Although originally a great success and a very well-designed system, Palantype Machine Shorthand never became very popular in the UK and from the 1960's had begun to decline. However, the Palantype machine was the platform on which many researchers later sought to develop and perfect a system for Computer Aided Transcription (CAT). Research and development on CAT using the Palantype device was first undertaken at the National Physical Laboratory (NPL) in 1967 - these experiments were not exploited commercially at that time due to the high costs of computing.

Eventually after further research by various universities and the BBC, an electronic version of the Palantype was developed into an advanced CAT system, still in popular use in the 2010s.