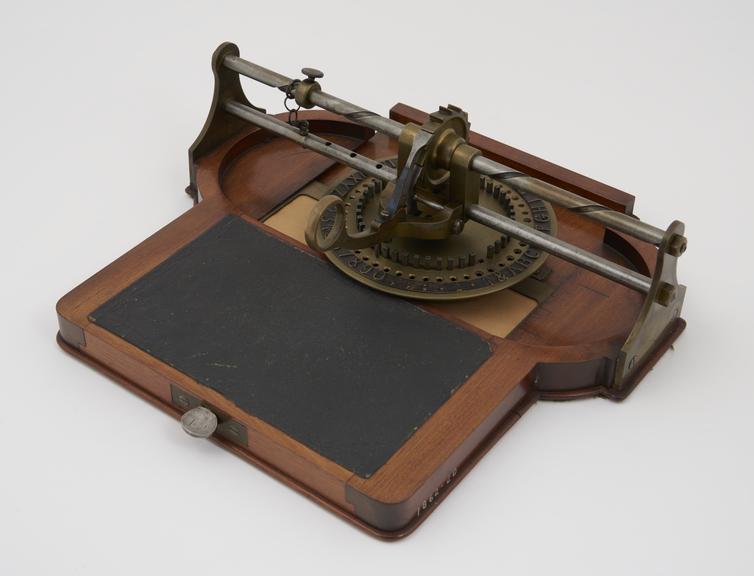 Hughes' typograph for the use of the blind, 1850. This machine enabled people who were blind to write without using type, done by using raised characters which could be read by touch. It was awarded medals at the Great Exhibitions of 1851 and 1862.

This machine was designed by Mr William Hughes, the first Governor of Henshaw’s Blind Asylum, Manchester (now Henshaws Society for Blind People) and was patented in 1850. Hughes and his wife were Governor and Matron respectively of the Institute from 1839. The institute was opened two years earlier in 1837 and was the second of its kind – the first being the Royal School for the Blind established in Liverpool in 1791.

This particular Typograph is the oldest English model and does not have a manufacturers plate or serial number. The machine was designed to enable people who are blind to communicate with people who can see. The machine was awarded a Gold Medal at the 1851 Great Exhibition and a further medal at the 1862 International Exhibition, where it was described as being “the most perfect as yet produced … [it] still holds its place of usefulness above all other printing machines for the blind.”

This machine was designed to enable people who are blind (but who are able to read raised letters of Roman characters but without any previous knowledge of writing) to, as the inventor described it, “express their thoughts upon paper with mechanical regularity” after a few short lessons.

The machine is equipped with a circular index plate with raised characters (43 in total), each with a corresponding vertical plate which carries the type face. The index is rotated by hand until the required character is in position directly under the lever at the front. The lever is then pressed so printing the character on the paper. Releasing the lever causes the whole carriage to move along one space. The screw at the front is for line spacing and one complete turn moves the paper one line space.

Hughes’ typograph was one of the more successful early typewriters designed for people who are blind and was a standard tool in schools for the blind throughout the 1850s. On a visit to Henshaw’s, Queen Victoria was “filled with astonishment and admiration” when a student named Mary Pearson typed the phrase “Her Most Gracious Majesty.”