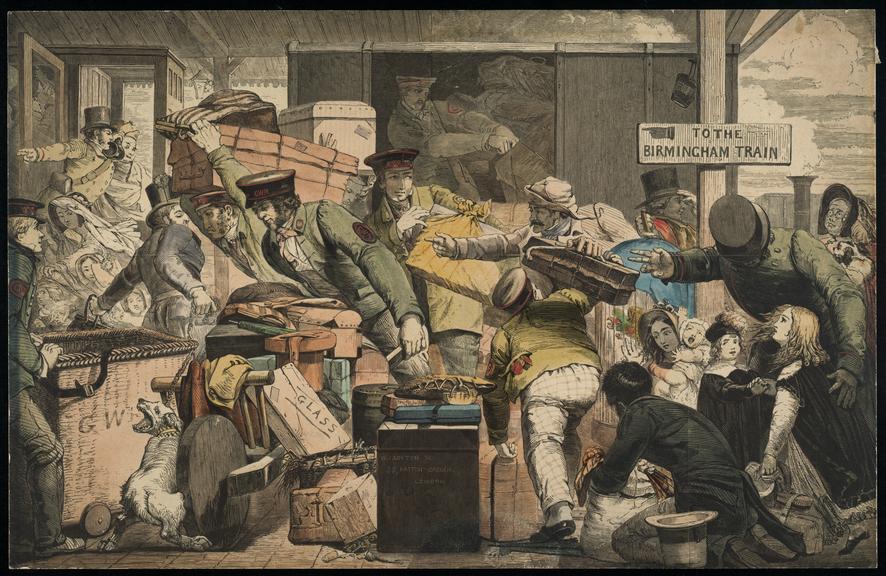 Engraving - GWR - 'Changing Gauge at Gloucester' c1846.
Science Museum Group Collection
© The Board of Trustees of the Science Museum

The engraving depicts Gloucester’s position at the frontier of two track gauges during the ‘Gauge War’ of the 1840s. This was a contest for territorial and commercial influence between railway companies using the 4-foot 8 ½-inch ‘narrow’ gauge, and those using the 7-foot ¼-inch ‘broad’ gauge, first introduced by Isambard Kingdom Brunel on the Great Western Railway to increase speed and efficiency.

Where broad gauge railways reached territory served by narrow gauge lines and shared station facilities, the break in gauge made it necessary to transfer passengers and goods between trains on through journeys. The image satirises the process at Gloucester, where two broad gauge lines and one narrow gauge line had converged by 1845. Two of these lines – one broad and one narrow – were absorbed by the Midland Railway.

The situation at Gloucester prompted Parliament to establish a Royal Commission. Its findings informed an 1846 Act of Parliament setting the narrow gauge as the new ‘standard’ gauge while restricting the construction of new broad gauge lines. Although broad gauge companies installed ‘mixed gauge’ track to allow access to standard gauge trains, the trend was towards a gradual conversion to standard gauge, which was completed in 1892.