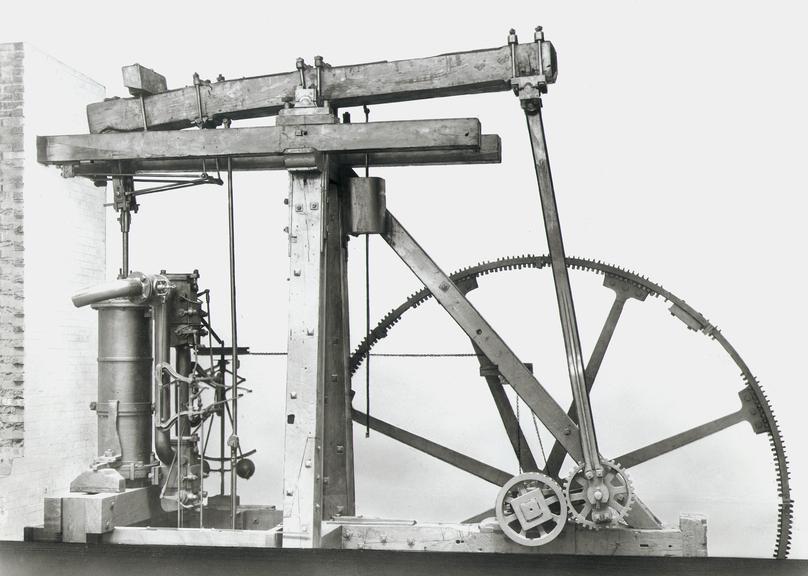 Boulton and Watt Rotative Beam Engine - the 'Lap' engine. This is the oldest essentially unaltered rotative engine in the world. Built by James Watt in 1788, it incorporates all of his most important steam-engine improvements. The engine was used at Matthew Boulton’s Soho Manufactory in Birmingham, where it drove 43 metal polishing (or ‘lapping’) machines for 70 years.

Boulton & Watt rotative engine. Employed at the Soho works of Boulton & Watt, this engine is known as the 'Lap' engine as it drove a number of metal polishing (or 'lapping') machines. It is the oldest surviving Watt beam engine to have survived almost complete and unaltered, and was the first to be fitted with the centrifugal governor. By 1800, when Boulton and Watt's partnership ended, 451 engines had been built of which 268 were rotative. By the end of 19th century, the steam engine had become the main source of power for industry and transport.

James Watt was a scientific instrument maker, who became interested in the steam" when repairing a model of a Newcomen engine for Glasgow University in 1765. He realised that heat was wasted by condensing the steam inside the cylinder, the substantial mass of which had to be heated and cooled for every double stroke of the engine.

Watt's cure for the fault he diagnosed was to add a separate chamber in which a vacuum was maintained, and to open this to the cylinder when the steam was to be condensed. The steam passed into this 'separate condenser and was cooled, while the cylinder remained hot. Specific fuel consumption was reduced to less than one third that of a Newcomen type engine.

Watt's partner, Matthew Boulton, wished to apply the steam engine to driving mill machinery and Watt designed a rotative engine for this purpose, of which this exhibit is an early example used in Boulton and Watt's own works. It differs from the pumping engine not only in provision for rotary motion, but also in being double acting, (the

piston gives power strokes in both directions of movement).The need to push the end of the beam upwards as well as pulling it downwards led to the substitution of a rigid linkage for the chains of the Newcomen engine, and Watt invented his 'parallel motion' to guide the joint between the piston rod and the short connecting link, in a straight line. The geared arrangement which takes the place of the conventional crank is known as the 'sun and planet' gear, and was devised to avoid infringing an existing patent. It has the curious

property of imparting a complete rotation to the flywheel for each one-way stroke of the piston.

Print of Henry Beighton's Engraving of a Newcomen Engine (print)