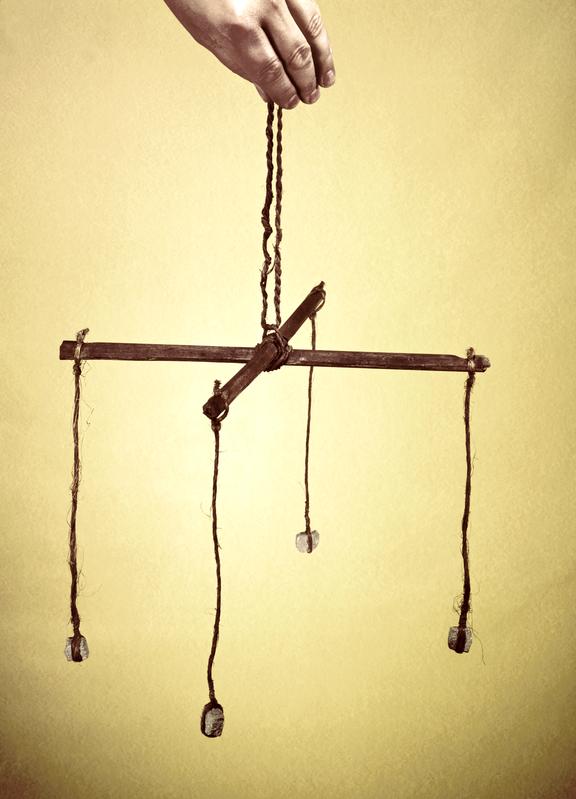 This roughly made groma was found during an excavation in the Fayum Province of Egypt in 1899. Early surveyors' instruments such as this were useful only on flat terrain and for setting a limited range of angles. With the groma, distant objects were marked out against the position of the stones in a horizontal plane. The groma is thought to have been used to set out the lines of roads at right angles in the 1st and 2nd centuries.

The following is from "A Science Museum illustrated booklet, Surveying: Instruments and Methods" by J. Wartnaby in 1968...

From Ancient Egyptian times down to the present day, the surveyor has always been required to set out lines at right angles. The need arises in the construction of buildings, the laying out of road networks in cities and the division of large areas of land into plots. Hero of Alexandria referred to the Grecian star as an instrument used by the surveyors of his time for this purpose and an improved form of an instrument, the groma, was used extensively by the Romans. For many years historians of science thought it likely that a device for this kind was used by the Egyptians but it was not until 1925 that part of the object shown here was identified as the forerunner of the groma. It had lain unrecognized in a storeroom with other Egyptian material since 1899, when the material was excavated at Fayum. Missing parts have been reconstructed in the Museum.

This device, dating from the first or second century B.C., consists of two centre ribs of date palm leaf lashed together at right angles with date palm fibre which also forms a loop for suspension. The four plumb-lines have bobs of limestone and when a pair of opposite lines is used for sighting, the other pair determines the direction at right angles.

The groma was succeeded by the more compact surveyor's cross and by the optical square.