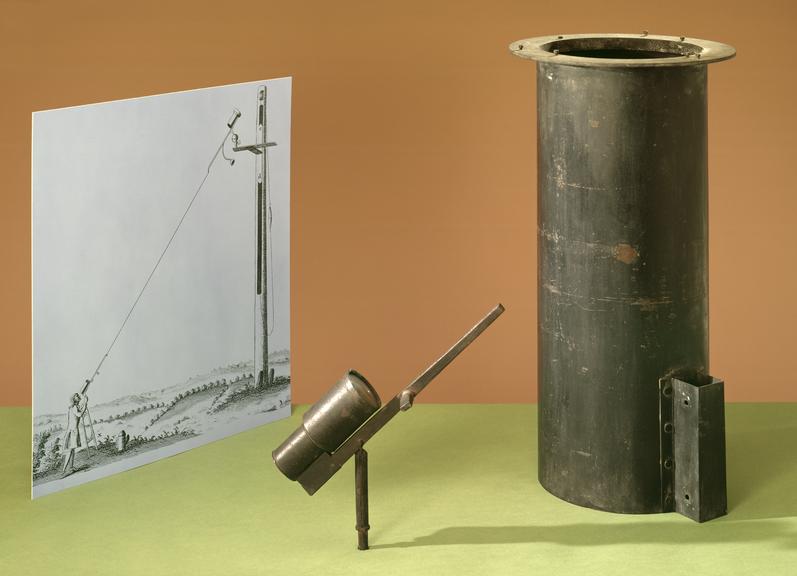 Selection of components for Huygens's 210-Foot aerial telescope. The objective lens for the instrument has been retained by the Royal Society along with 2 other Huygens lenses. The component parts consist of an iron cylinder with wooden spar to carry the main object glass lens along with 4 eyepieces of 10 inch, 7 1/2 inch, 6 inch and 4 1/8 inch focal lengths.

An aerial telescope was a long refracting telescope that did not use a tube, so its objective lens could be mounted onto a large existing structure such as a tree or a building, effectively allowing a longer tube and a sharper image.

This example was designed and built by Christiaan Huygens in the late 17th Century and it uses a simple iron cylinder built specifically for the purpose of mounting the objective lens. It is one of the largest optical telescopes in history, and at the time it was built in 1686 it was the world’s largest telescope with 210 feet of focal length. However, the sheer size of these aerial telescopes made them difficult to use, so alternative designs continued until extreme focal length was made obsolete by the achromatic lens in the mid-18th century.

Tubeless telescopes are thought to have first been created by Christiaan and his brother, Constantijn, but research has shown similar ideas were used by their contemporaries and it is not clear who really was the first. Prior to building this telescope, Huygens published a book which detailed how it would work in 1684, titled “Astroscopia Compendiaria”.

He donated the telescope to the Royal Society where he had been elected a fellow in 1665, where the objective lens remains. The components at the Science Museum include eyepieces and the cylinder mounting for the objective lens. It is likely that some parts were modified or replaced by later Fellows of the Society.

Huygen’s was the first to identify the rings of Saturn as "a thin, flat ring, nowhere touching, and inclined to the ecliptic," (1655) and discovered the first of Saturn's moons, Titan, using a refracting telescope.