Pharmaceutical Fermenter Used in the Development of Semisynthetic Penicillins 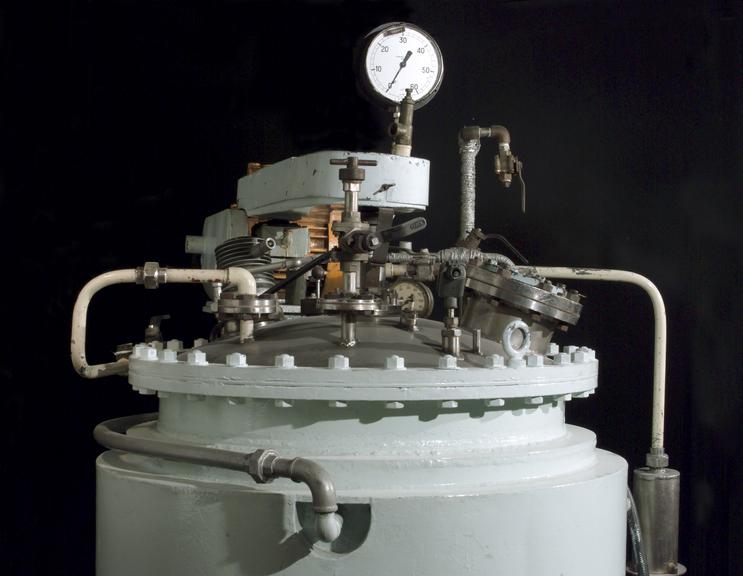 How many antibiotic tablets get swallowed every year? Too many to count: together the world’s antibiotic consumption exceeds 30,000 tons. So manufacturing this drug treatment is big business. Penicillin was discovered by Alexander Fleming in 1928, when a mould on his petri dish destroyed the surrounding bacteria. But even in 1940 only tiny amounts of penicillin could be extracted from the mould, Penicillium notatum. So how did mass production become possible?

One method was to build enormous tanks for growing the mould. The first commercial facility opened in February 1944, with fourteen tanks. Each vessel was about the size of a tanker lorry and held 34,000 litres of nutrient-rich broth. Why is this fermenter smaller? It was used for research, but has all the same features – temperature control, a good seal to prevent contamination, and stirrers for keeping the broth mixed and in motion.

Growing loads of mould seemed slow and inefficient – was there another way to mass produce penicillin? Was it possible to make synthetic penicillin, from chemical rather than biological processes? Scientists at Beechams Pharmaceuticals used this fermenter for experiments with semi-synthetic penicillin. This was based on making a root compound by fermentation and then adding selected branches chemically. The vessel was designed under the direction of Ernst Chain, who with Howard Florey and Norman Heatley, had made that first extract of penicillin in 1940.

Was Beechams’ research successful? In collaboration with American company Bristol-Meyers, they launched the first semi-synthetic penicillin in October 1959. Although always limited by bacteria becoming drug-resistant, mass production has enabled antibiotic pills to be popped by the millions.