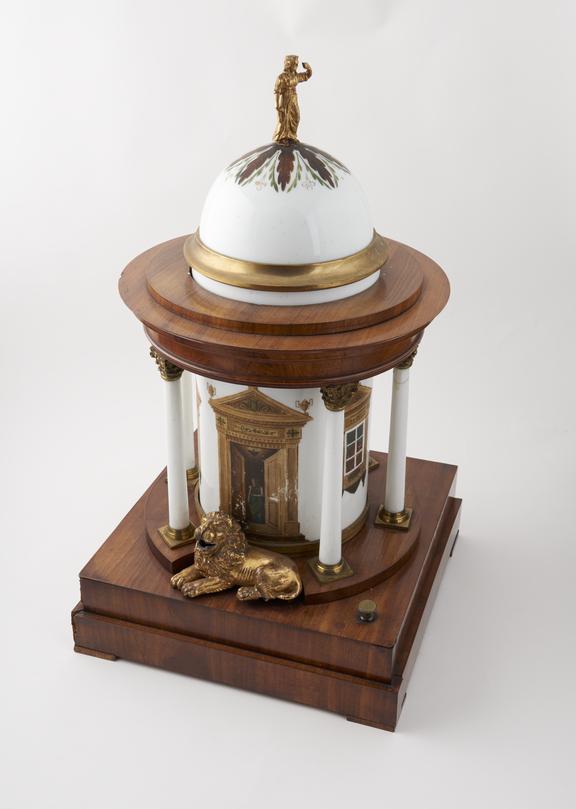 The instantaneous ignition of a steam of hydrogen by an electric spark obtained by the discharge of an electrophorus provided a flame without trouble or smell in this device of 1807. The hydrogen generator is concealed within the decorative cylinder; the electrophorus is within the base: and the flame, which issues from the lion's mouth, is obtained by depressing the finger button on the right.

The electrophorus consists of a disc of resin which is charged by rubbing vigorously with a cat's skin. A circular metal plate rests on the disc and is raised into contact with an electrode wire when the button is pressed. At the same time the button opens a valve in the gas tube and a spark passes across the gas from the electrode wire to the tube.

Hydrogen is generated in a double glass chamber in the inner of which is a lead dish containing pieces of sheet zinc. The surrounding liquid is dilute hydrochloric acid which is depressed by gas pressure out of contact with the zinc when enough gas has been generated. The inner vessel, and thus the gas supply, is confected by a pipe to the gas valve while the outer vessel has a vent to the air.

A label in German on the apparatus reads "C.F. Schultz, Turner, In Stettin at the Berliner Thor No. 489. Manufacturer of every kind of electric fire machine. Also damage is repaired by the best manner". The device was patented in England in 1807 as a communication from an unnamed German source. Recharging of both the hydrogen generator and the electrophorus was required periodically but moth might last, with moderate usage, for a period of weeks.

Bryant and May collection of fire-making appliances.