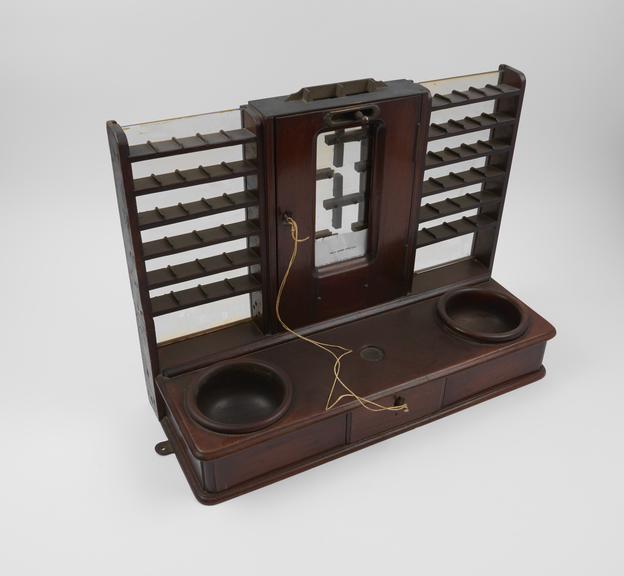 Cash till patented by J.C. Cox (Patent no.9106), late 19th C.
Science Museum Group
© The Board of Trustees of the Science Museum

This late Victorian mahogany and brass mounted double-sided cash till was invented and patented by Jehu Christopher (J.C., also known as John) Cox in the late 1800s.

Cox was publican and owner of the Black Friar pub at 174 Queen Victoria Street, London from 1881 to 1911 and possibly beyond. Cox grew up in Dorset and originally began training as a violin maker but family circumstances resulted in him coming to London around the mid-1870s and becoming the first licensee of the Black Friar pub. Cox was also an inventor and patent holder, inventing devices to track “payments made over a public house bar, counter, or elsewhere.” These included a machine to change gold coins, and tills to register and store coins.

This inventive double-sided cash till, patent number 9106, was designed to function as an early form of cash register for public houses and other businesses and was made from solid mahogany, brass, and thick glass plates. Both customer and cashier could follow the coin offered in payment as it was dropped in a slot and held in a zigzag system of trays between two panes of glass, before dropping into a locked money box in the base. The mechanism was activated by a set of brass levers that slid back and forth and caused a bell to ring each time a coin was inserted.

Instead of the usual single coin rack on both sides of a central tower, this double-sided model has two coin shelves back to back on one side of the tower, for use by two cashiers. A wide base on both sides contains bowls for loose change. On one side, two bowls were inset into the base, but the other side has only one bowl laid in, on the right side, with a locked drawer on the left. A small, detachable wooden bowl was placed in a shallow circular insert above the drawer. The drawer usually contained an extra bowl and a set of keys.

This cash till was designed to prevent fraud or theft by either the till operator or the customer. A customer paying for the goods would place their money in the slot at the top of cabinet, from where it would fall to a series of racks and after a number of transaction would reach the lowest most rack and fall into a locked drawer at the bottom, visible to both customer and till operator throughout.