Jet Engine on a test bed 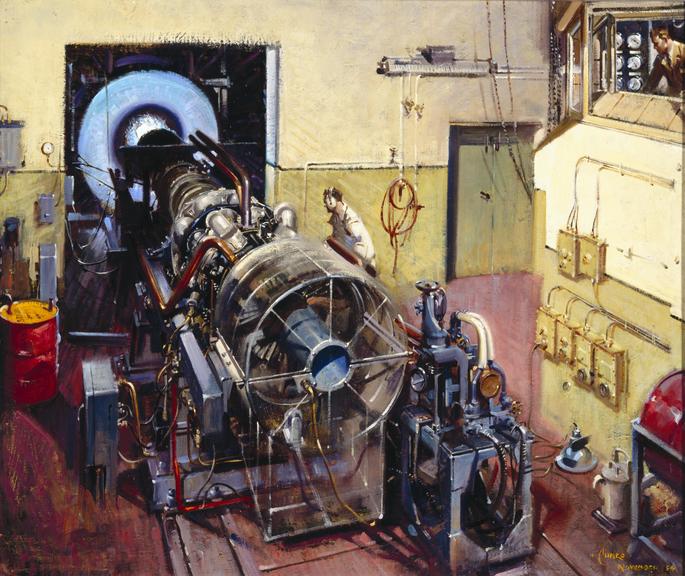 Painting, Jet Engine on a test bed; [Jet engine on test] by Terence Cuneo, November 1954. Oil on canvas; 63.5 x 76.2 cm
Science Museum Group Collection
© The Board of Trustees of the Science Museum

In his autobiography Cuneo describes the experience of observing the engine, showing the considerable physical pains that he went to in producing his work: “Then, there was the time when I had to crouch beside the open bore of a deHavilland ‘Ghost’ jet engine on test, ear-muffed, listening to the piercing scream of ‘peak revs’ and trying to observe the colour effects of the lurid glow within the cone. Concentration was not aided by the fact that with the mounting crescendo, the slipstream began tearing at my trouser legs and all but snatched me from the ladder, whilst my whole inside started shimmering, as if jerked by invisible springs. It was only possible to endure this for seconds at a time and I had constantly to signal the operator in his sound-proof cabin to decelerate.” (The Mouse and his master, 1977, p.47). Cuneo's trademark mouse has not yet been found yet in this scene.

The painting was originally presented to Lord Hives, the chairman of Rolls Royce by C. M. Vignoles, Managing Director of Shell-Mex and BP on 15th December 1954. It is not clear why Vignoles would have presented Hives with a painting of a rival engine.

Satirical print of a failed balloon launch from Foley House, London in 1784 (print)