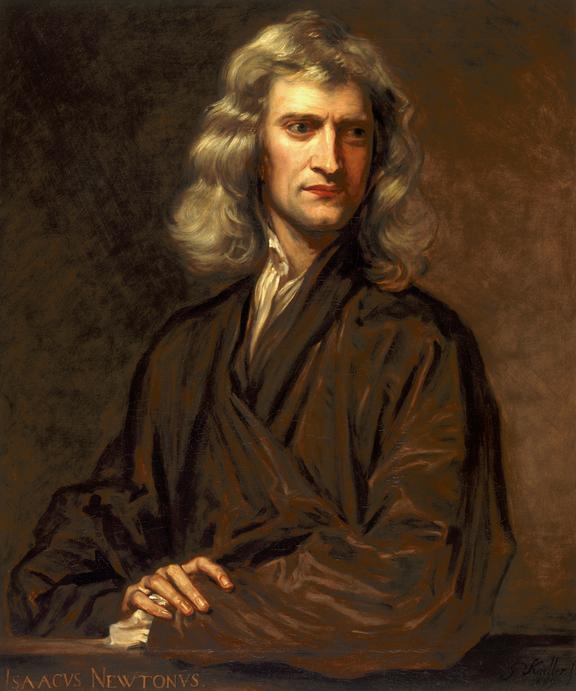 This is a copy after a 1689 original by Sir Godfrey Kneller made for the ‘National Gallery of Portraits of Inventors, Discoverers and Introducers of the Useful Arts’ developed by Bennet Woodcroft at the Museum of Patents (an ancestor of the Science Museum). The original Kneller portrait remains in the possession of the Earl of Portsmouth.

The Kneller painting of 1689 was not well known until the 1860s. It had hung in Newton’s home during his lifetime and so was seen by his social circle but not by the wider public. Kneller painted another portrait of Newton in 1702 and during Newton’s lifetime this later painting was by far the more famous image (now in the National Portrait Gallery, NPG 2881).

Samuel Crompton (grandson of the inventor) sent a photograph of the 1689 Kneller painting to Woodcroft in March 1860. Woodcroft had, by 18 December 1861, forwarded the photograph to the engraver Thomas Oldham Barlow, who asked Lord Portsmouth’s permission to engrave the painting. On 6 December 1861, Crompton advised Barlow that other engravers were also interested in engraving the portrait, and Barlow acted promptly. In June 1862, with the painting in Barlow’s studio and the engraving underway, Woodcroft asked the Earl of Portsmouth to consent to a copy in oil being made. The Earl agreed on condition that the original not leave Barlow’s studio, and Barlow subsequently agreed to let his studio be used. Although Barlow’s name is inscribed on the copy’s reverse, he was an engraver and so it is unlikely he painted it himself. The identity of the copy artist remains unclear.

This copy in oil (which hung in the Patent Museum) and the engraving by Barlow will have helped to disseminate the newly emerged 1689 portrait to a wider audience. The National Portrait Gallery holds a print of Barlow’s engraving (NPG D38743).