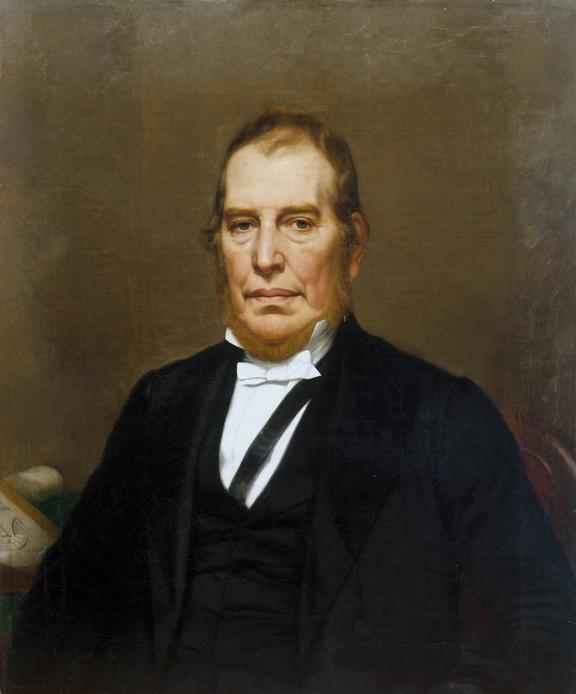 Portrait of Richard Roberts (1789-1864), painted from life 1858-1859 by Thornton Rippingille. Oil on canvas. Roberts is shown half length, slightly to turned to the left, with papers and plans on the table to the left.

Roberts was an inventor and engineer based in Manchester. This portrait formed part of the Bennet Woodcroft Bequest, which was among the founding collections of the Science Museum. Woodcroft had developed a 'National Gallery of Portraits of Inventors, Discoverers and Introducers of the Useful Arts’ combining gifts, loans and purchases of portraits, while acting as the first curator of the Patent Museum.

Bennet Woodcroft commissioned the artist Thornton Rippingille to paint this portrait in a letter of 27 December 1858. Roberts sat for Rippingille and the portrait was completed in mid-February 1859. In a letter of 14 July 1860, Woodcroft informed Rippingille that Thomas Oldham Barlow was engraving the oil portrait. This engraving would form part of the Portfolio of 'Portraits of Inventors of Machines for the Manufacture of Textile Fabrics with Memoirs' published by Thomas Agnew & Sons with an introduction by Woodcroft in 1863 (see 1980-840). Text accompanying the engraving lists it as 'from the original picture by T. Rippingille in the collection of Mr. B. Woodcroft, Great Seal Patent Office'.

Thomas Agnew (junior) wrote, on behalf of his father of the same name, to Woodcroft 19 December 1861 asking for permission to have the oil portrait copied by Samuel Sidley (1829–1896), whom Agnew refers to as ‘a young & very rising artist’. Sidley wrote to Woodcroft on 13 January 1862 thanking him for the loan of the portrait. The copy by Sidley was gifted by Thomas Agnew (not clear whether senior or junior) to Salford Museum & Art Gallery and it remains in that collection (accession number 1868-29).