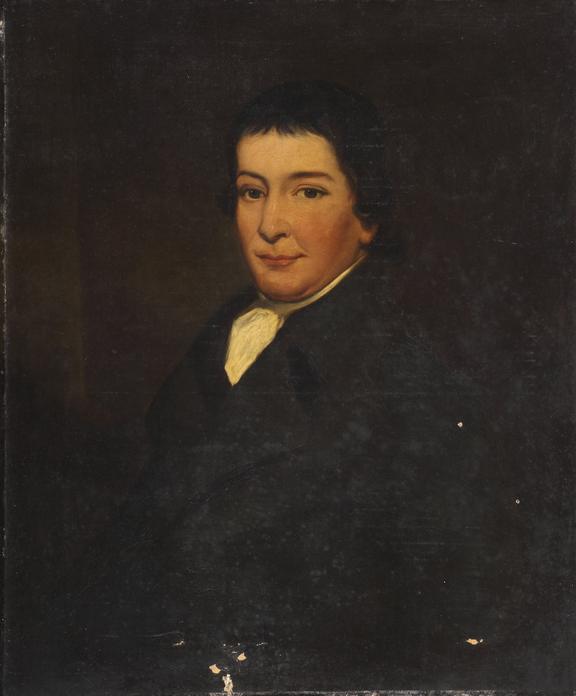 Portrait of William Radcliffe (1760-1841), probably after Jacques Gabriel Huquier. Oil on canvas. Radcliffe appears half length, facing left, in a dark jacket and white neckerchief, against a dark background.

This is a copy from an original in crayons which in 1859 was in the possession of the Radcliffe family. Thomas Radcliffe (son of William) lent the original to Bennet Woodcroft so it could be used as the basis for an engraving of Radcliffe by Thomas Oldham Barlow. Thomas Radcliffe stated the original was a good likeness and that it was made when his father was 45 years old, dating the portrait to 1805 or 1806. Text below Barlow’s print states it is ‘from the original by Huquaire’ lent to Woodcroft's collection, likely a reference to Jacques-Gabriel Huquier (born 1730), an artist who often worked in crayons and pastels. Huquier died in 1805 which would date the original to 1805 rather than 1806.

As he often did with original portraits lent to him, Woodcroft organised for the picture to be copied. This was done by Charles Sibley, an artist that Woodcroft hired several times to repair paintings and paint copies. The copy was completed by early March 1860 at the latest, as it is listed as an addition to the gallery in a letter of 5 March 1860 from Woodcroft to W. Johnson of the Practical Mechanic’s Journal Office, Glasgow.

An engraving of this portrait was made by Thomas Oldham Barlow and included in the Portfolio of 'Portraits of Inventors of Machines for the Manufacture of Textile Fabrics with Memoirs' published by Thomas Agnew & Sons with an introduction by Woodcroft in 1863 (see 1980-840).