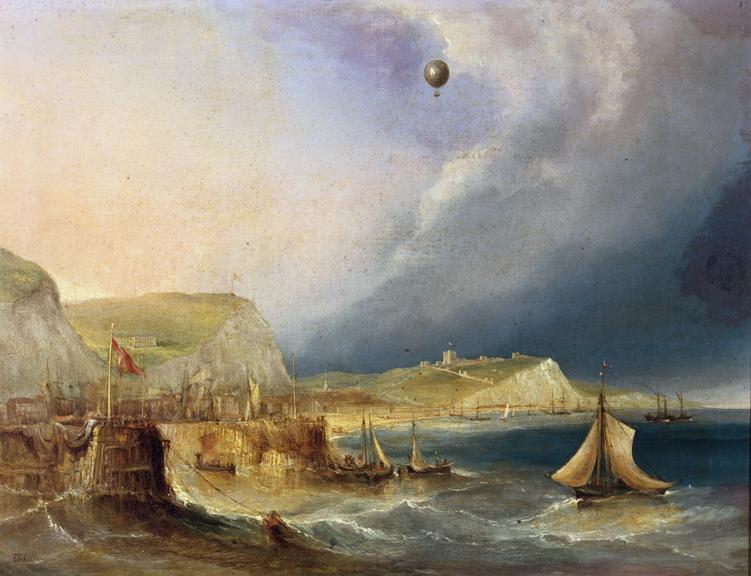 This oil painting depicts the balloon flight made by famous expert Charles Green from Vauxhall Gardens, London to Nassau, Germany on 7 November 1836. Shown flying over Dover Castle is the 'Royal Vauxhall Balloon', designed not only for distance flights but for carrying passengers and scientific equipment. The capacity required, combined with Green's choice of coal gas as fuel, meant the balloon was enormous.

By the 1830s balloon flights were no longer an unusual event and to retain public interest aerial flight had to be promoted in new ways. Green's flights became theatrical spectacles, even performing ascents on horseback and being accompanied by a parachuting monkey. In contrast to previous aerial entertainments, there was no advertising for the Nassau flight. The popularity of Green's shows led him to transfer to the Royal Gardens Vauxhall in the summer of 1836, whose owners Gye & Hughes financed the construction of Green's 80-foot-tall balloon. Although it cost around £2,100 (over £100,000 today), including about £700 (£34,000) for the silk, Gye & Hughes had no desire to profit from the expedition. The flight was kept a secret until lift-off, its main purpose being for scientific experiment. Three men were aboard the balloon. As well as Charles Green, there was the Irish writer, and keen balloonist, Thomas Monck Mason, who penned a recorded of the journey, and Robert Hollond, an English balloonist and Whig Parliamentarian. As legend of the expedition has grown, a tale of the crew dropping a note by parachute for the mayor of Canterbury as they passed over the city has spread. The 480 miles journey took 18 hours - a record unsurpassed for a voyage from England until 1907.

Hollond commissioned E.W. Cocks to paint 6/7 scenes commemorating the flight, created from Green and Mason's voyage notes. These paintings remained in the Hollond family until 1913 with the sale of Holland's possessions after his death. Sir Adam Mortimer Singer purchased at least 8 paintings at the sale, including 'Balloon Leaving Dover'. These were subsequently sold in 5 lots [156-160] at Christies on 21 February 1930. 'Balloon Leaving Dover' is later believed to have been loaned for the Grosvenor Gallery's aeronautical exhibition. It was later acquired by Winifred Penn-Gaskell who gave her aeronautical collection to the Science Museum in 1949. Upon acquisition, this painting was wrongly identified as depicting the first balloon crossing of the English Channel by Blanchard and Jeffries in 1785. Cocks went up at least once in Green's 'Royal Vauxhall' Balloon on its second flight on 21 September 1836, flying 8 miles to Bromley in 40 minutes. While a skilled oil painter of balloons and landscapes, Cocks was best known as an 'ornamental and scenic' painter in non-theatrical public entertainments, primarily at Vauxhall Gardens. From the early 1820s until the closure of the gardens due to bankruptcy in 1840, Cocks was the resident painter creating innovative large-scale paintings and dioramas. These included a 24-metre-high image of the Bay of Naples for a firework display and a dramatic cosmorama of Captain Ross's expedition to the North Pole, which culminated in a scene featuring Ross rising from the icebergs.

Green's record-breaking flight from Vauxhall was a phenomenal achievement. He pioneered the use of coal gas instead of hydrogen, proved the efficacy of the trail-rope, still in use today, and demonstrated gas balloons were capable not only of safe flight but considerable speed. In all he made over 500 ascents. It is therefore sad these achievements ended in tragedy. The year after the Nassau flight, on 24 July 1837, Green's balloon lifted Robert Cocking's revolutionary new parachute a mile high before Cocking jumped out, becoming the world's first parachute fatality. Cocks reportedly decorated Cocking's parachute canopy. After this tragedy, balloons inevitably lost their appeal.

This was gathered with help from the Art UK Art Detectives website.