Fallacy of the Organic Theory of Doctors, illustrated by Hygeists 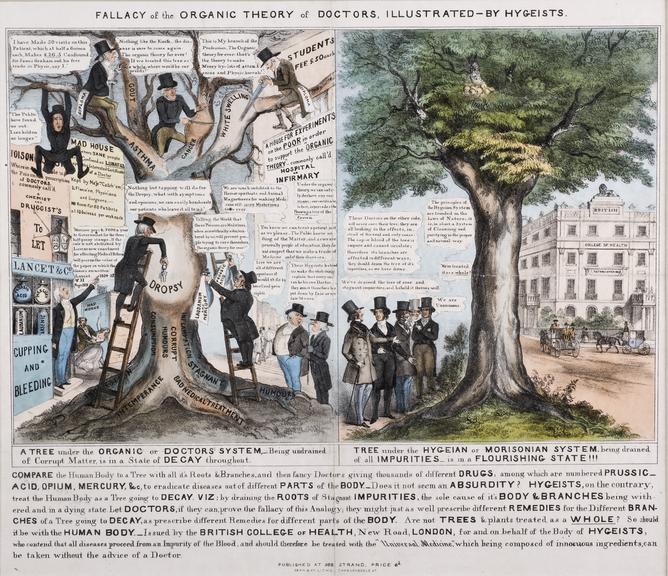 According to James Morison, everything bad about British medicine is on the left side of this illustration, and everything good about his Hygeian system is on the right – can you tell the differences? They represent many of the debates about the practice of medicine in the 1800s.

On the left, doctors are hated for their high fees and poisonous drugs, and for being useless despite their academic learning. What’s the effect on the tree, representing the human body? It is decaying. On the right, Morison’s grandiose British College of Health, opened in 1828, is seen in the background. And the tree? It is flourishing.

What did doctors think of him? The Lancet medical journal called him a quack, and chemists were upset – can you see them on the left side? The poster cost six pence but was actually an advertisement for his patented ‘Universal Medicine’, a violently cleansing pill. He used agents to sell the pills through local ‘Hygeist’ branches, and spent heavily on advertising – on posters, in newspapers and with a monthly Hygeian Journal.

What did his customers think? The pills were wildly popular in Britain and the USA for about ten years. But the massive doses supposedly required caused real harm. Several of his agents were convicted of manslaughter. After this spate of sudden deaths, sales hit rock bottom and Morison retired to France.