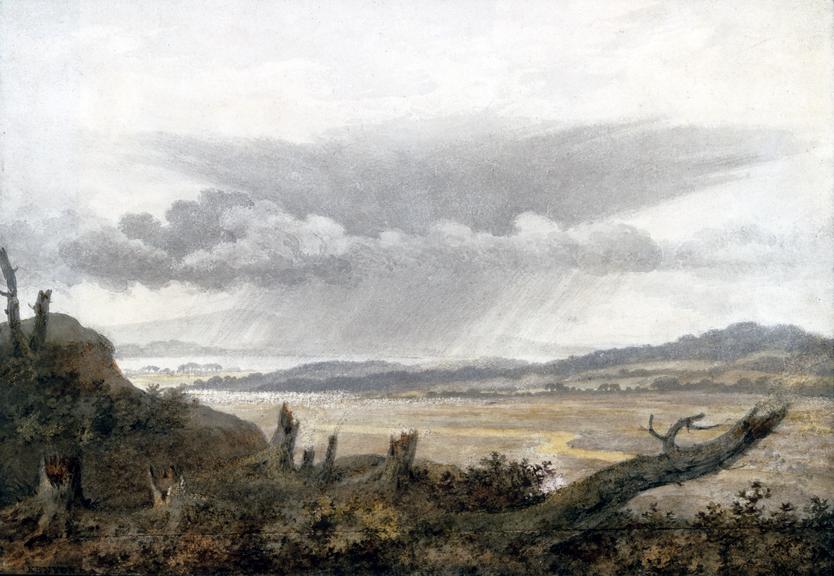 [Cloud modifications] / E Kenyon [Kennion] with Luke Howard. - n.d. [March 1849]. - one of 4 drawings: pen, watercolour, with white; 28x19cm or smaller; [Plate 5] Nimbus, or rain cloud. - Original studies of clouds "from nature" by Luke Howard, with landscapes by "Mr Kenyon". These were lithographed by EM Williams and printed by M&N Hanhart as illustrations for the 3rd edition of Howard's Essay on the Modifications of Clouds, 1865. The explanations of plates prefacing this edition are by "LH, March 1849" who gave "a number of sketches" to Kenyon. Clouds and landscapes of drawings 1 and 3 are closely related to engravings in Rees' Cyclopedia, dated (Science Museum copy) 1810 and 1820, after work by "E. Kennion" or E. Kennyon" ie, Edward Kennion (1744-1809). It is not known whether these watercolours were executed by 1809, by Edward Kennion using cloud sketches made by Luke Howard (1772-1864) during his most active time of cloud sketching and observation; or, whether Howard refers to Kennion's son Charles John (1789-1853), also an accomplished landscape artist, who may have worked with these sketches in 1849 or 180-. The watercolours are not dated, and more than one finished study may have been made by Howard from his sketchbooks, at any time 180- to 1849. nos. 1 and 4 together in frame 51x37.5x2.5cm.

Watercolour sketch by Kennion, with cloud studies by Luke Howard (1772-1864). This plate shows 'nimbus, or rain cloud'. Ordering and classification were important features of Enlightenment science. Fascinated since childhood by the weather, and clouds in particular, Luke Howard classified and named different cloud types publishing in 1803, providing sketches for these later illustrations. His work has influenced many of the landscape painters of the Romantic era, including Turner and Constable. Although he was a pharmacist, his contribution to the developing science of meteorology led to Howard being made a Fellow of the Royal Society in 1821. His terminology and symbols are still largely used to describe clouds today.