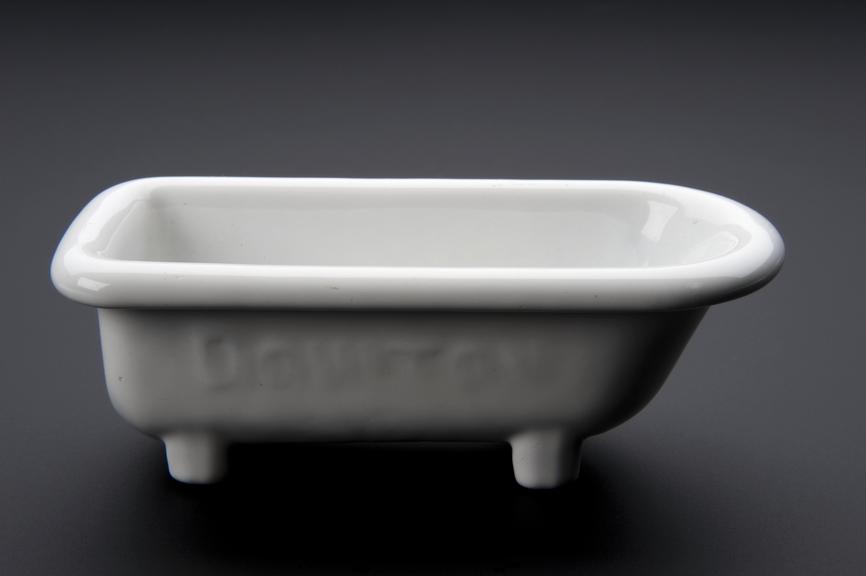 It’s 1890, and ever since you were little, Friday night has been ‘bath night’ – in the tin tub in front of the fire. Now you’ve just been visited by the Doulton & Company salesman who’s told you that all the aspiring middle classes are buying ceramic baths, with plumbed-in water, for their bathrooms. Will you get one?

Much of Doulton’s business in the mid-1800s was producing glazed stoneware pipes for sewers and drains, part of the drive to improve sanitation. They later began making sanitary ware – toilets, wash basins, baths, and the world’s first glazed ceramic kitchen sink. From 1919, all new houses were required to have a bath installed – it was estimated that only ten per cent of British homes had one already.

So how did the salesman convince householders to buy his products? He couldn’t really turn up on your doorstep with a bath under his arm, so Doulton produced these miniatures. They were also lighter than the bulky trade catalogues. The salesman was knowledgeable too – he probably knew as much about domestic hygiene as any medical professional.

Doulton & Company made so much money from their drain pipes and sanitary ware that they built new art studios for designing more decorative works. Figurines were launched in 1913, under the direction of artist Harry Nixon. At auction, figurines with an early ‘HN’ pattern number and the Royal Doulton mark can go for thousands of pounds – a product for today’s aspiring middle classes?