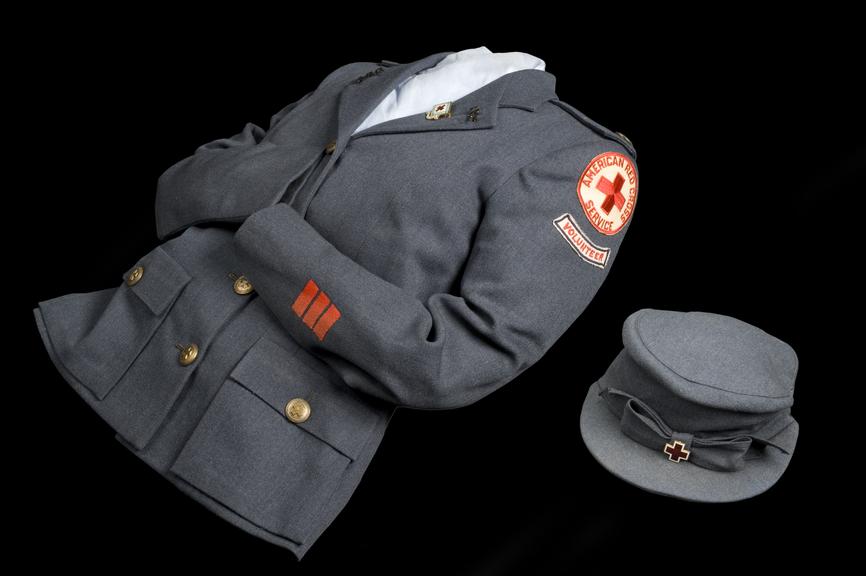 Made from serge, this jacket has an ARC badge pinned to each lapel as part of a volunteer’s uniform. ‘ARC’ stands for the American Red Cross. It was made by Burberry, the British clothing manufacturer, who also made the British Army’s uniforms during the First World War.

During the Second World War, and prior to America’s military involvement, the American Red Cross provided supplies to civilian victims in Europe. This was as part of the International Red Cross’ war time plan. The ARC also ran clubs providing food, entertainment, barbers, laundries and overnight accommodation for soldiers both in Europe and, later, in the Pacific arena.

Once America entered the war, the ARC increased its involvement – continuing to work in countries physically affected by the conflict as well as at home. By the end of the war the numbers of volunteers involved with the ARC could be counted in the millions. It is shown here with an ARC jacket (1978-512/1).

credit:
The Duchess of Argyll.

Section of miniature hospital including kitchen and theatre (hospitals; models)

Painted head board from a hospital bed (headboard)