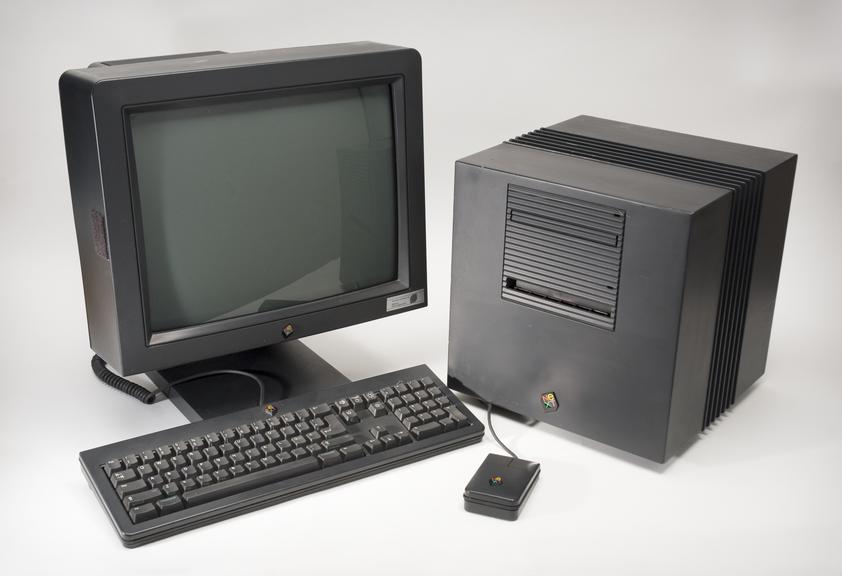 This image is released under a Creative Commons Attribution-NonCommercial-ShareAlike 2.0 Licence

NeXT computer A powerful and advanced machine

NeXT computer, made by NeXT in the United States from 1988.

The NeXT Computer (or NeXT Computer System) was a high-end workstation computer developed, manufactured and sold by NeXT, a company founded by Steve Jobs. It ran the Unix-based NeXTSTEP operating system. Packaged in a 1-foot (305 mm) die-cast magnesium cube-shaped case, the computer was informally referred to as 'The Cube'.

The NeXT Computer featured a magneto-optical drive, though a hard disk was available as an option and a 1120×832 pixel four-level grayscale MegaPixel 17" monitor with built-in speakers. The 68030 CPU was supported by a 68882 FPU for faster mathematical performance, a 56001 digital signal processor (DSP) for multimedia work and two custom-designed 6-channel direct memory access (DMA) channel controllers, which allowed much of the input/output (I/O) processing to be offloaded from the CPU to boost the speed of common tasks. A powerful and advanced machine, the NeXT computer was used by Sir Tim Berners-Lee to devise the World Wide Web and acted as the world's first ever web server.

NeXT collaborated with the Higher Education sector to develop a workstation computer intended to be used by students and academic organisations. Priced around $6500 when it was released, the NeXT computer was intended to be 'the first computer of the 1990s'.