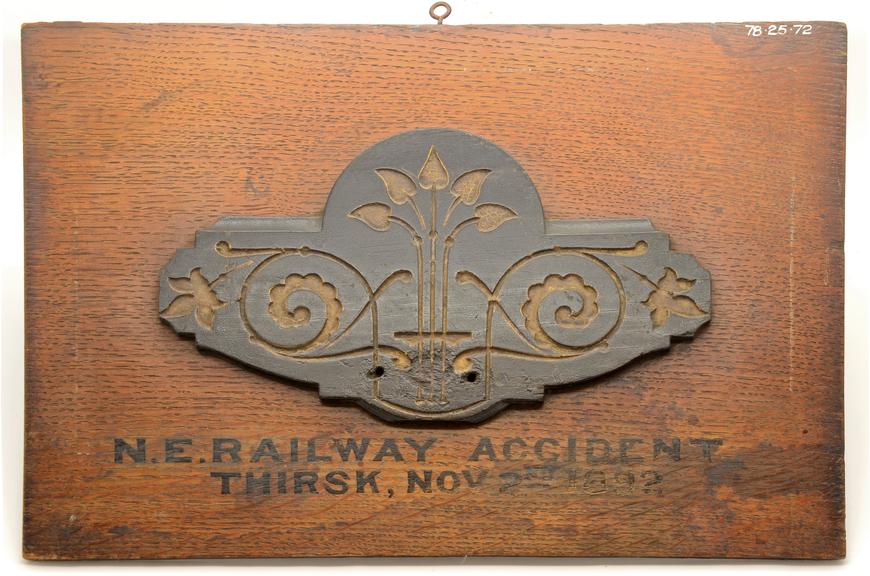 North Eastern Railway commemorative plaque remembering an accident at Thirsk on November 2nd 1892. Made from a piece of carriage panel found in the debris. With letter on back from original donor. Overall: 261 mm x 365 mm x 7 mm.

The rail crash at Thirsk in 1892 was tragic for many reasons. Signalman James Holmes, on whose section the accident occurred, was exhausted. His baby daughter had been sick all night and died in the early hours of the morning, and he had not slept for over 24 hours. Combined with the grief of losing his child, this fatigue ultimately overtook him and the resulting crash would claim the lives of nine people and injure 39 more.

Holmes had tried to arrange relief with the stationmaster at nearby Otterington but had been forced to work his shift when none could be found. A passenger express train passed through his section down the main line, and he let it through as normal. Then, a goods train was sent through his section and came to a halt outside his signalbox. It was at this moment that Holmes was overcome by exhaustion and fell asleep for roughly 13 minutes. When he awoke, confused, Holmes had received the notice to be ready for a second passenger express. Holmes saw that his instruments still indicated there was a train on the line, but fatally he thought he had simply forgotten to clear the instruments after the first express had passed through. He accepted the second express.

The passenger express crashed into the rear of the goods train at sixty miles per hour. The guard of the goods train, along with nine passengers, were killed. After the collision, a fire started from the firebox of the express train, which was accelerated by the oil gas lighting system in use at the time.

James Holmes was tried for manslaughter and, weeping in the courtroom, was found guilty. However, the judge ruled that he be given an absolute discharge, a decision that was popular with a public who had deep sympathy for Holmes’ situation. The railway company was criticised for failing to find relief when Holmes had essentially reported himself unfit for duty.

Shoehorn made from brass rescued from Thirsk disaster (shoehorn)