'Iago - study from an Italian' 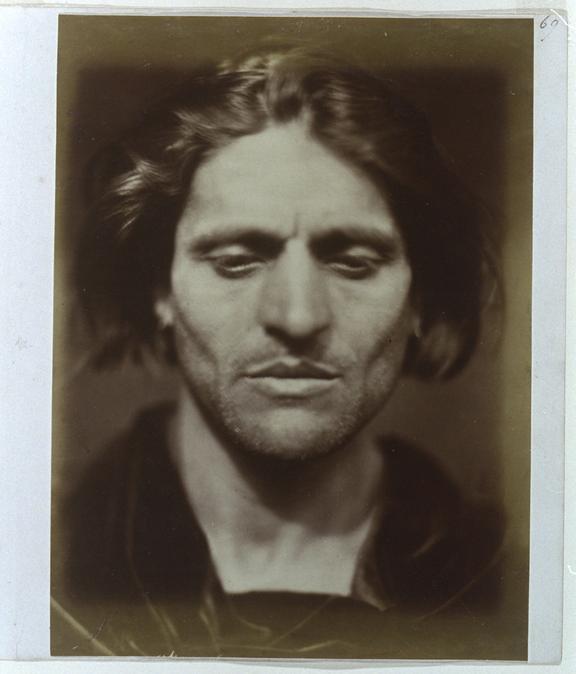 A photographic portrait of the artist's model, Angelo Colarossi (born about 1839), taken by Julia Margaret Cameron (1815-1879) in 1867. The print forms part of the Herschel Album.

Julia Margaret Cameron (1815 – 1879) is one of the most important, influential and creative photographers of the 19th century. She took up photography at the age of 48, having been given a camera by her daughter as a present. For the next eleven years, photography dominated her life.

The print forms part of the Herschel Album, created by Cameron for her friend Sir John Herschel (1792-1871). This is the only existing print known of 'Iago'. The negative may have been destroyed intentionally by Cameron, and it is believed that the print was taken for George Frederic Watts (1817-1904) to work from for a painting. Iago was the villain of Shakespeare's play 'Othello'.

Cameron favoured literary, historical and religious themes. Her unconventional portraits usually featured her servants, friends and family members, although she also made striking portraits of prominent figures in the fields of arts and sciences such as Alfred, Lord Tennyson, Sir John Herschel and Charles Darwin.

This photograph of Angelo Colarossi, a professional model, makes a direct reference to literature; Iago being a character in Shakespeare's Othello.

Photograph of Hedy Lamarr and her mother Gertrude Kiesler (photograph)

The photographic library of the 'Daily Herald' newspaper, 1911-1965 (photograph)