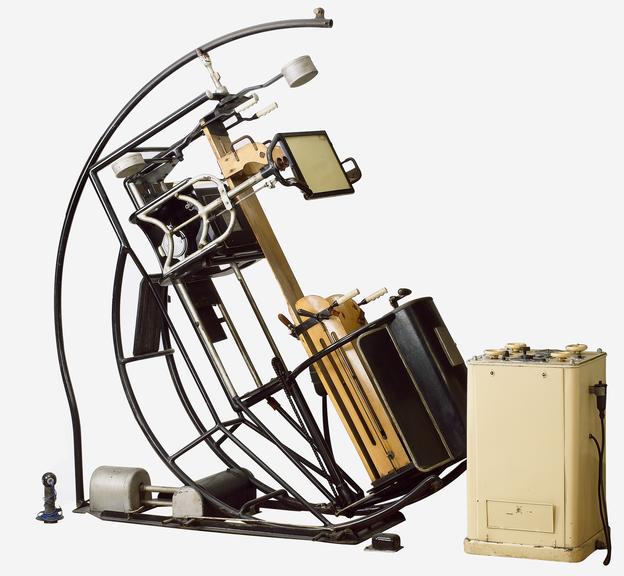 This impressive machine is known as an ‘Omniskop’. During the 1920s, it belonged to Ernst Rachwalsky, a doctor working in Berlin who specialised in the treatment of stomach problems. Both his family and his highly successful practice were firmly established in the German capital, yet in 1936 Dr Rachwalsky felt compelled to emigrate and take his chances in London. Why did he feel he had to go and why was he so keen to take this device with him?

By the early 1930s the Nazi Party was in power in Germany. Life became increasingly dangerous for Jewish people like Rachwalsky and his family. Eventually, rather than stay and face the growing threat he decided get out of the country and travel to England. His family joined him shortly afterwards. Rather than leaving his machine behind, Rachwalsky shipped the Omniskop over in parts to England. There he carried on using it in the new London medical practice he established until his retirement in 1962.

Rachwalsky had bought this cutting edge, and very expensive, machine to assist his work on stomach disorders. Using counterweights and a motor, the Omniskop could position patients at a variety of angles. This meant Dr Rachwalsky could take x-ray images of many different views of his patient’s stomachs, for more effective diagnosis. Some patients apparently found it a frightening experience. Others found it a fascinating machine to ride in. In its own retirement, the Omniskop has been the centrepiece of exhibitions and inspired Hollywood movie set designers. It certainly seems to be a machine that people get very attached to.