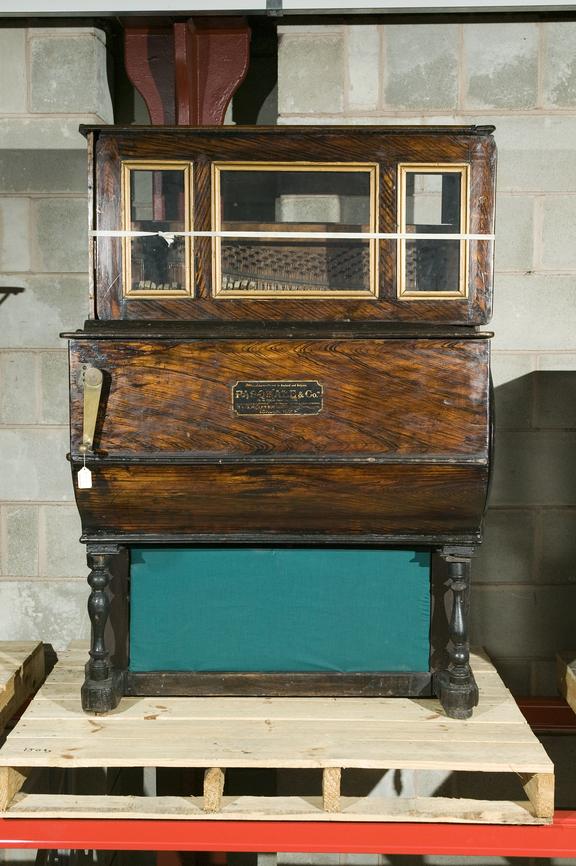 Barrel piano associated with Simon Robino, Manchester and Pasquale and Co., London, made about 1910-1923.

Many barrel pianos like this example were crafted by Italian manufacturers who settled in the Ancoats area of Manchester, just east of the city centre. The area became known as 'Ancoats Little Italy' because of the number of Italian immigrants who made it their home in the nineteenth century.

Barrel pianos were often set on a cart and played in the streets by Italian street musicians, sometimes known as organ grinders, who earned money through the musical entertainment they provided. Organ grinders could hire their barrel piano from local manufacturers, rather than having to invest in their own.

Barrel pianos are also know as 'self-acting' or 'automatic' pianos, because inside the piano is a barrel, onto which the music to be played is encoded using pins. The musician turns a hand crank to spin the barrel. As the barrel rotates, its pins operate a combination of hammers, which strike strings to sound different notes and produce a tune. The musician can control the speed at which the tune is played by turning the handle slower or faster. They can also select the tune to be played, with one barrel able to hold the information for several different songs.

A painted label on the inside of this barrel piano indicates an association with Simon Robino of Ancoats, Manchester, whilst a label on the front of the piano associates it with Pasquale and Co. of London. This places some uncertainty over the piano's true maker. When barrel pianos were repaired, the craftsperson undertaking the repair would sometimes add their own name to the piano, and it is possible that either Robino or Pasquale did so on this example.