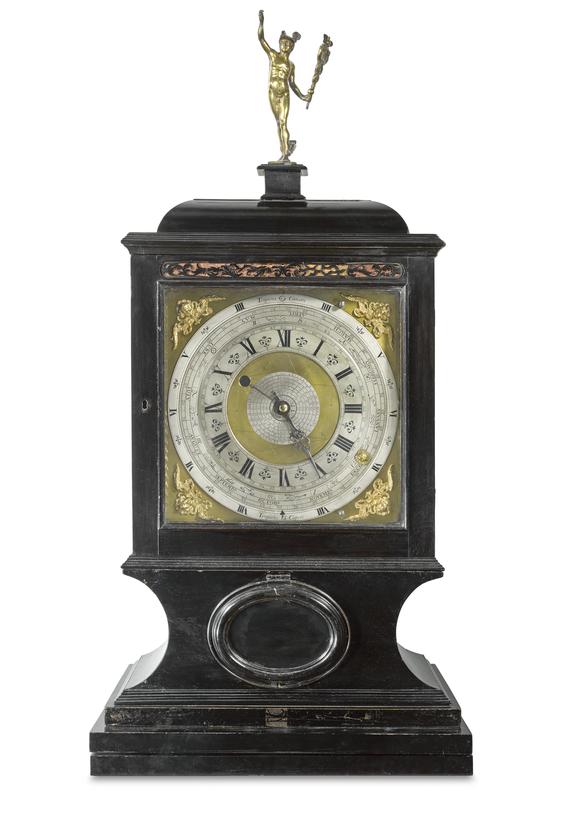 Astronomical spring table clock in ebonised case with statue of mercury on top by Samuel Watson.

8-day movement with engraved back plate, one bracket engraved with an eclipse, rack striking, anchor escapement and half seconds pendulum with separate sliding weight for regulation.

The 11 inch dial shows both astronomical and astrological information as follows;

The fixed outermost ring on the dial gives the times of sunrise and sunset, denoted by a gilt sun, which revolves clockwise once in 365 days. The ring to which the sun is fixed is engraved with the months of the year and corresponding signs of the Zodiac. Next is a silvered chapter ring on which the hours and minutes are indicated by a single hand. The brass lunar dial within this chapter ring revolves once in 29½ days and has an aperture showing the phases of the moon. Also engraved on this dial are the 'aspects'- lines for trine, quadrature, sextile and opposition of the moon used in making astrological deductions. The innermost set of seven rings shows the time of the setting of the moon during the first half of its lunation and that of its rising during the second half, each ring referring to different months.

Watson became a free Clockmaker in 1692.

This clock is believed to have been the property of Sir Isaac Newton.

Collection:
The Worshipful Company of Clockmakers

credit:
Lent by the Worshipful Company of Clockmakers

'Memento mori' watch in the form of a skull, known as the 'Mary Queen of Scots' watch. (skull watch; verge movement)