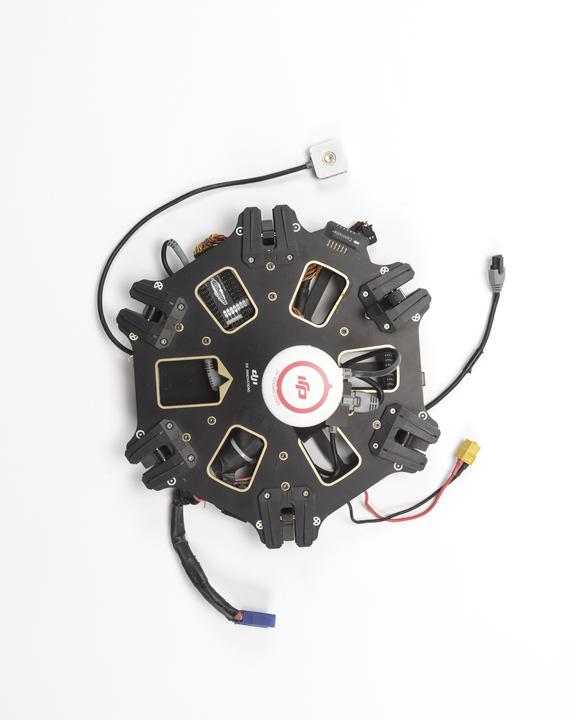 This image is released under a Creative Commons Attribution-NonCommercial-NoDerivs 4.0 Licence

Antenna from Hexacopter drone kit and digital video camera. The kit was built by the Global Video Unit and used to collect video footage for the BBC's news platforms worldwide.

The hexacopter was the first drone to be used to gather footage by BBC News. It has two sets of legs, with the T-shaped legs acting as skis to give the drone stability when landing.

It was built by the Global Video Unit of the BBC, a team dedicated to producing video content for all of the BBC's worldwide news platforms. It was first used in October 2013 to shoot footage for a story about HS2, and in January 2015 it was used to shoot footage of Auschwitz that then went on to become the most viewed video on the BBC News Youtube channel. It was decommissioned in 2016.

Richard Westcott from the BBC talked about his first experience with the Hexacopter in 2013; “This machine is unique in being able to go close to something then soar into the air in one smooth movement. It can creep along the ground, shimmy a fence, crawl through a tree then climb to 400ft (120m) for a spectacular panorama.”

In the same article Westcott revealed it was not very easy to film with the drone as it was noisy, it had just 10 minutes of flying time per battery and it was hard to fly in the first place. As with other drones, there were rules for flying it: it couldn’t go within 50 metres of a road or building, it couldn’t fly over crowds, and it couldn’t go 500m along or 120m above the pilot.

As an extra layer of safety the hexacopter has a GPS system inside of it that means the machine automatically returns to where it came from if the radio link between the pilot and the drone breaks down. The hexacopter has also made the job of a reporter safer with less need for risky helicopter reports in order to get good shots. However, it isn’t all plain sailing; three BBC journalists got in trouble in 2015 for flying a drone in a no-fly zone during the World Economic Forum.