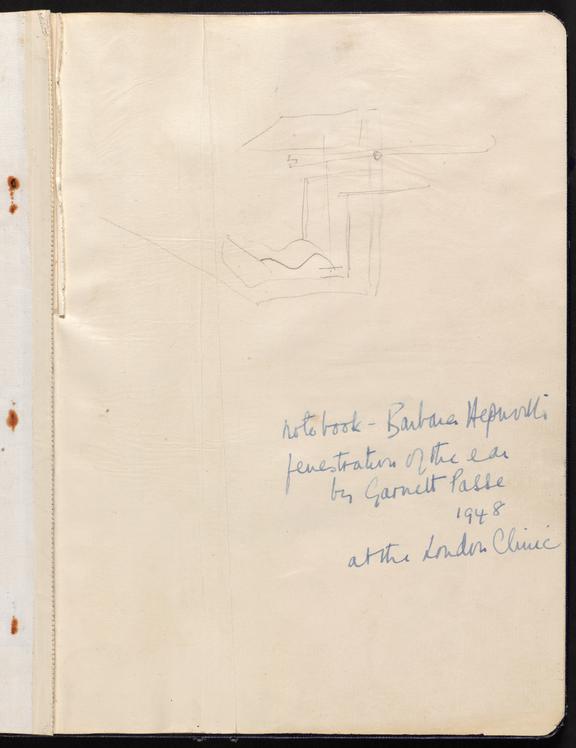 Sketchbook, depicting stages of an operation inscribed on the title page with: “fenestration of the ear by Surgeon Garnett Passe at the London Clinic, 1948”, by Barbara Hepworth, London, England, 1948. Comprises 31 pages of drawings in pencil, some in ink. Signed and dated by the artist on the title page. Some pages have been removed.

This is the only surviving sketchbook from a two-year period that the sculptor Barbara Hepworth spent observing surgical procedures in Exeter and London. Following her daughter Sarah’s osteomyelitis, Hepworth met the surgeon Norman Capener, who had operated on Sarah, and invited the artist to observe operations at Princess Elizabeth Orthopaedic Hospital in Exeter, and later in London.

The sketchbook comes from 1948, when Hepworth observed the surgeon Garnett Passe performing fenestration of the ear at the London Clinic. This was a procedure pioneered by Passe (but now obsolete) to correct otosclerosis, a significant cause of hearing loss in middle-age, which involved opening a new ‘window’ into the inner ear by removing a small piece of bone. Hepworth was fascinated by the harmony of the operating theatre, and by the parity of Passe’s use of the hammer and chisel with her own use in sculpting. She wrote later in her Pictorial Autobiography of ‘such beauty in the coordinated human endeavour in the operating theatre that the whole composition – human in appearance – became abstract in shape … an articulated and animated kind of abstract sculpture very close to what I had been seeking in my own work’.

Her sketches made of the surgery are rough and hurried, intent on recording the visual relationships and detailed use of instruments that she would need to produce larger paintings. She annotated her sketches with the names of people and instruments, colours, scales, and stages of the operating procedure. Hepworth produced a series of six paintings from these sketches, which are largely titled with the key piece of equipment that they show. ‘The Hammer’, now in the collection of the Tate (Object no. T02098), is taken directly from the drawing on page 18. Other works are in the collections of the Fitzwilliam Museum in Cambridge, Leeds Art Gallery, Bolton Art Gallery, and a Private Collection.

The sketchbook is inscribed by Hepworth and accompanied by a letter to Garnett Passe’s wife Barbara. The Passes remained friends with Hepworth and Passe spent his last holiday at her studio in St. Ives. The private theatre sister shown in the sketches was Margaret Moir who later became Hepworth’s secretary. Produced in the years that the NHS came into being, Hepworth’s sketchbook records the kind of medical experience that so many had before a national health service, requiring expensive private treatment. She and many other artists became passionate advocates for the welfare state.