Chinagraph pencil and tubes on board 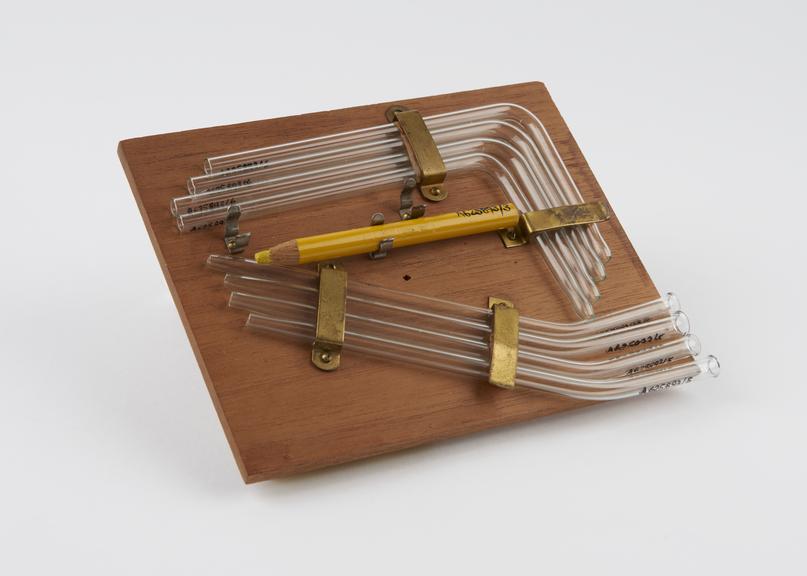 Wooden board with glass tubes attached, part of blood transfusion apparatus originally thought to be designed by Geoffrey Keynes, but believed to be designed by Oswald Hope Robertson during the 1st World War and made by the General Surgical Co. Ltd., 1917-1918

It’s 1917, and you are a wounded soldier at a British casualty clearing station on the Western Front. You are bleeding badly and going into shock. You are in danger of dying and urgently need blood – but where are you going to get it?

Luckily, it’s right next to you and in the best device available at the time. It was developed by Captain Oswald Hope Robertson, a British-born US Army medical officer working at a base hospital treating British wounded. He designed and pioneered this early portable blood transfusion kit, with a special device in the flask for regulating the flow of blood, both in and out.

His design was effective because it didn’t require the donor to be present like other machines which connected up two individuals to transfuse blood directly from person to person. The blood collected in his devices remained viable for several hours as the glass containers held a small measure of sodium citrate, which prevented the blood from coagulating. Once collected via one needle, the blood could be taken to the patient who needed it and delivered via the second needle – and the help of the hand pump.

Blood transfusion began to show its huge potential in the latter stages of the First World War and Robertson continued to innovate in the field. Through his blood preservation techniques he went on to develop some of the very first blood banks.