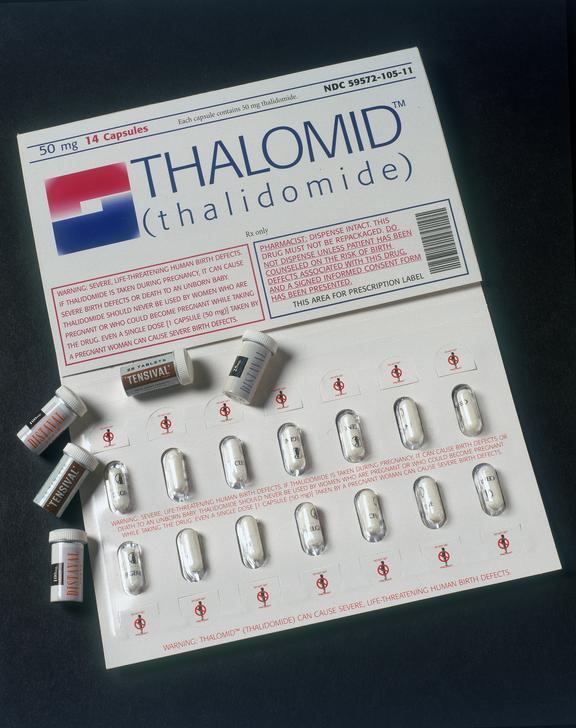 Thalidomide capsules. (1988-243/28) 24x25mg of Distaval tablets (thalidomide), in metal container, by The Distillers
Science Museum Group Collection
© The Board of Trustees of the Science Museum

If taken during the first three months of pregnancy, thalidomide causes impairments such as limb difference, sight loss, hearing loss, facial paralysis, and impact to internal organs. A single tablet can be the cause. It took three years for the link to be made between thalidomide and the impairments it caused. UK distributors withdrew the drug in 1961 and a government warning was issued in May 1962.

The compound thalidomide was created in 1954 by Chemie Grünenthal, a German pharmaceutical company. It was first officially released in West Germany for use as a sedative with minimal side-effects in October 1957. Thalidomide was distributed in the United Kingdom by Distillers, a drinks company.

Thalidomide was used in various drug preparations under several different names. Although today it is associated primarily as a treatment for pregnancy related nausea, it was also prescribed to anyone experiencing symptoms of colds, flu, headaches, anxiety, and insomnia. One woman was prescribed thalidomide to help her settle into life in the United Kingdom after emigrating.

Some people who took thalidomide on their doctors’ advice did not know they were pregnant. The standard test for pregnancy at the time was three missed periods. Some people were unaware they had taken it. Frequently, mothers were made to feel guilty and often blamed themselves for taking the drug.

Thalidomide’s impact rippled from people’s births shaping their lives and those around them. A study by the Thalidomide Trust found that 80% of people are living with chronic pain because of wear and tear on their bodies. Many have become ambassadors for disability awareness, not because they wanted to, but because they had to, often facing prejudice and exclusion from society.

Laws and processes around drug testing in the United Kingdom were changed due to thalidomide. Medication labelling was also more tightly controlled. Many people living with thalidomide impairments and their families feel they have not yet received moral justice. The Thalidomide Society was set up in 1962 by parents of children living with thalidomide impairments to support each other, to fundraise to help the families who were struggling financially and to start the long battle for recognition and compensation.