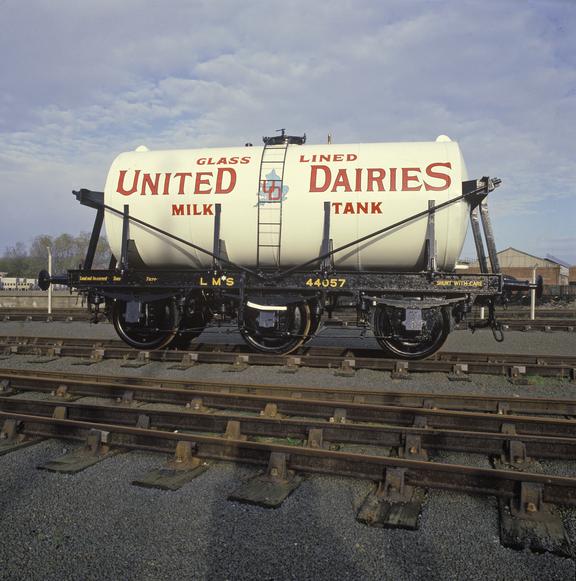 Milk trains were introduced to transport raw milk from remote farms to central creameries. This wagon was used on the London, Midland & Scottish Railway which collected milk from Cumbria and North Wales. United Dairies was formed in 1917 and in the 1920s helped to increase the sale of pasteurized milk in the UK.

Originally, milk was transported by rail in churns. However with the tank wagon design, trialled and adopted in 1927 by the Great Western Railway and London, Midland & Scottish Railway, the transport capacity was greatly increased. After some issues with stability and some derailments of the original four-wheeled examples, three-axled six-wheeled wagons were introduced from 1931. This allowed the wagons to travel safely at the speed of the passenger trains to which they were often attached.

The Milk Marketing Board was created in 1933, and by 1942 they had taken control of all milk transport. The wagons retained their original liveries until they needed repainting, at which point “MMB MILK” was painted black on a silver-grey background. By the late 1960s road haulage had begun to compete with rail for transport of milk, and by 1981 the final rail contracts had been lost. The MMB kept some milk tank wagons for five years after this, eventually disposing of its fleet in 1986.