The accident to the Irish Mail Train 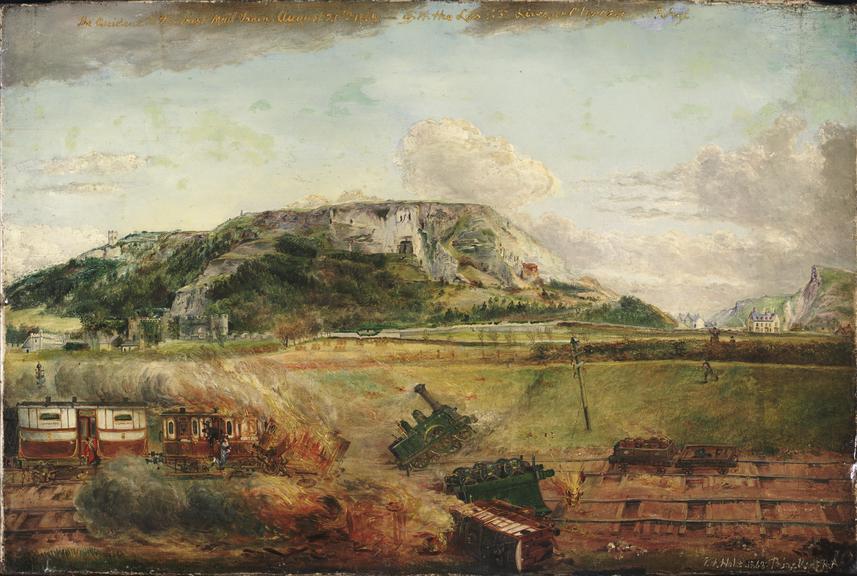 The accident to the Irish Mail Train, August 20th 1868
Science Museum Group Collection
© The Board of Trustees of the Science Museum

Painting, oils on canvas, The accident to the Irish Mail Train, 20 August 1868, with the loss of 33 lives, at Abergele, Rhyl, by E F Holt, 1868. Naive depiction of the derailed Irish Mail train with the tender upside down, several carriages and wagons on fire, and passengers trying to escape. Two wagons remain on the track, one of them laden with barrels of paraffin. Three men run to the scene. In the background are the wooded hills around Gwrych Castle. Title inscribed across the top of the painting. Signed "E.F. Holt 1868 Prize Medt. R.A." Unframed.

On the morning of 20 August 1868, the Irish Mail was heading north from Euston on its usual service towards Holyhead. At the same time, a goods train was heading towards the same destination, amongst its haul two wagons loaded with casks of paraffin.

When this goods train arrived at Llandulas Station near Abergele, there was no room on the sidings for the whole train due to goods wagons occupying them. The stationmaster ordered the train to be split – the brake van and last six wagons were left uncoupled on the main down line while the shunt was carried out on the sidings. The gradient towards Abergele was steep, and somehow the brake van became loose, causing the wagons to begin to career down the line.

The Irish Mail had left Euston late, and was delayed further in Chester. These factors meant that it came upon the runaway wagons as they emerged round a curve of the track. The driver, Arthur Thompson, saw them approaching about 200 yards away, and could not prevent the collision. Thompson jumped from the engine, unsuccessfully calling to his fireman to do the same. The force of the collision derailed the engine, the tender, and the guard’s van. The front van and following three coaches of the Mail had burst into flames as the paraffin from the goods train ignited.

There was considerable public outcry in the aftermath of the accident, as it appeared that the compartment doors of the burnt carriages were locked. A witness claims to have tried to help free the passengers from the locked carriages; however, when the wreckage was examined, the locks that could be found were unlocked. In any case, officials believed that the fire engulfed the carriages so instantaneously that it was unlikely the passengers could have saved themselves.

33 people died in the accident, which at the time was the worst disaster on Britain’s railways.