'Stay alive. Stay off the line!' 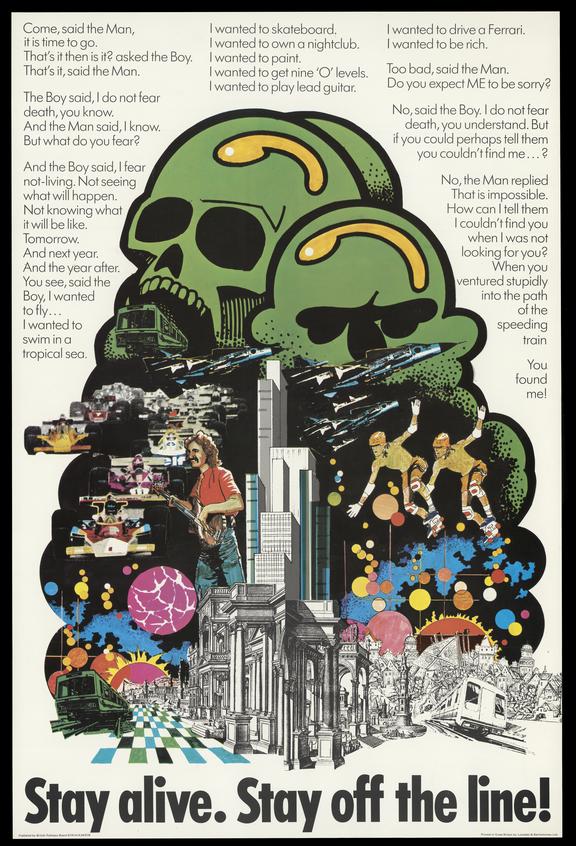 British Rail safety poster, Stay Alive. Stay off the line!, 1979
Science Museum Group
© The Board of Trustees of the Science Museum

Poster, British Rail, Stay Alive. Stay Off the Line! 1979. The poster features a lurid montage including green skulls, fantastical cities, aircraft, trains, planes, cars and skateboarding. An accompanying verse tells the story of a teenage boy, killed trespassing on the railway, and his dashed hopes for the future, by way of discussion with Death. Printed by Lonsdale and Bartholomew, published by British Railway Board. Serial 6141A/A34/579.

British Rail safety poster aimed at discouraging teenagers from trespassing on the railway, titled Stay Alive. Stay off the line!, 1979.

It is accompanied by blank verse in which a boy, killed while trespassing on the railway, engages in a dialogue with Death, lamenting the fact that he won't be able to swim in the tropics, own a nightclub, play lead guitar, paint, skateboard or get nine O-levels!

The poster was published by the British Railways Board and printed by Lonsdale and Bartholomew Ltd.

'Play safe - not on railways' (poster)