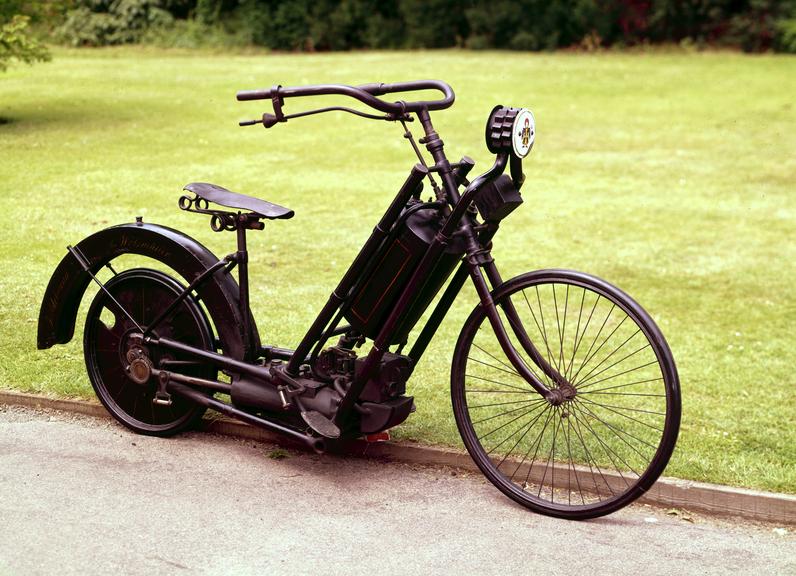 Wolfmuller motor bicycle, 1894. It was the first practical motorcycle to be put on the market. Alois Wolfmüller and
Science Museum Group Collection
© The Board of Trustees of the Science Museum

This petrol-engined cycle, patented by Alois Wolfmuller and Hans Geisenhof in 1894 (Patent No. 78553, January 20 1894), and made by Messres Hildernrand and Wolfmuller of Munich, was the first practical motorcycle to be put on the market, and many were built in Germany and France.

The frame of the bicycle consists of four horizontal tubes, between which the engine is mounted. This is a four-stroke type with two cylinders of 90mm diameter by 117mm stroke. The pistons are connected with two parallel cranks on the rear axle. The pistons move in unison, but firing takes place in alternate cylinders on each stroke.

The connecting rods are tied to adjustable points near the cylinder heads by rubber bands which store up energy on the explosion stroke and assist the following compression stroke.

Each cylinder head contains an automatic inlet valve and a mechanically-operated exhaust valve. The explosion mixture is supplied by a surface carburetor.

The maximum speed is 24 miles an hour.