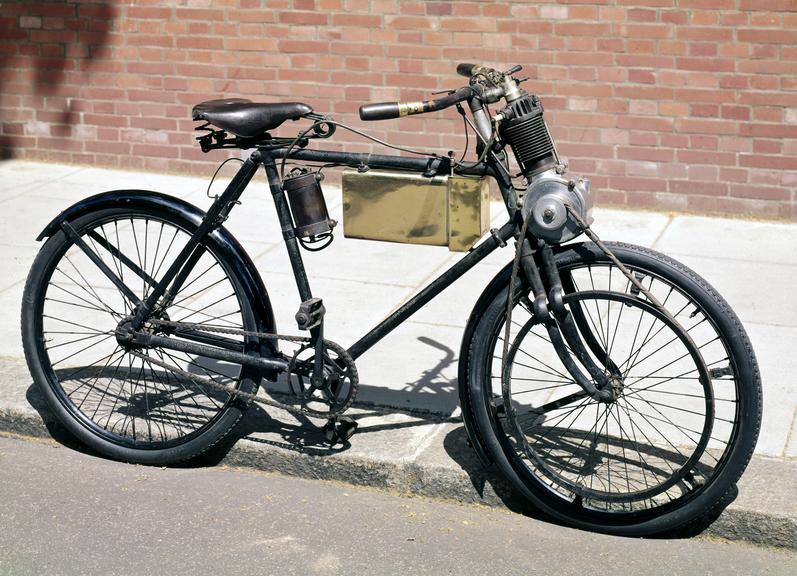 Werner motor cycle, 1899. This originates from the 1897 design by MM. Werner Freres of Paris and is regarded as
Science Museum Group Collection
© The Board of Trustees of the Science Museum

Werner motor cycle, 1899. The engine is attached to the steering head and the petrol tank to the top frame and it is lightweight with a smoother drive due to the belt drive, however it was a little unstable due to its high centre of gravity.

Following the comparatively complicated designs of the 1890’s (e.g. motor tricycles with engines geared to the rear axle and primitive motorcycles with connecting rods directly coupled to cranks and on the driving wheels), a simpler method was evolved om 1897 by Werner Freres of Paris.

The light weight (65 lbs.), smoothness of operation due to the belt drive, and the comparative economy of the first Werner machines did much to establish the motorcycle as a practical method of individual travel. However, the high centre of gravity made them prone to side slip, particularly in wet weather.

This machine has a high speed de Dion type engine of Werner design fitted to a strengthened safety pedal bicycle. The single-cylinder, air-cooled, four-stroke engine is attached to the steering head and partially supported by reinforced front forks. The drive is taken to a belt rim on the front wheel through a round belt of twisted strip rawhide joined by a detachable fastener. The petrol tank, incorporating a wick vaporiser, is attached to the top frame tube. An ignition coil is clipped to the seat tube, and the accumulator is carried under the saddle.

The engine cylinder (217 c.c.) is 62mm. bore and 72mm. stroke, the exhaust valve is mechanically operated, and the inlet valve is automatically operated. Lubrication is affected by the insertion of a quantity of oil in the crankcase lubricator every ten to fifteen miles. The hand throttle is located over the inlet valve in the induction pipe which is partially incorporated in the frame steering head. An extra mixture control is obtained by twisting the left handlebar grip. The rear brake is of the simple band type, operated from the handlebar through a cable.

This Werner machine may be regarded as the first successful machine of a type which came to be known as a ‘cyclemotor’. It was still being ridden fifty years later through the Second World War and this object still has the motor fuel ration book from 1949.