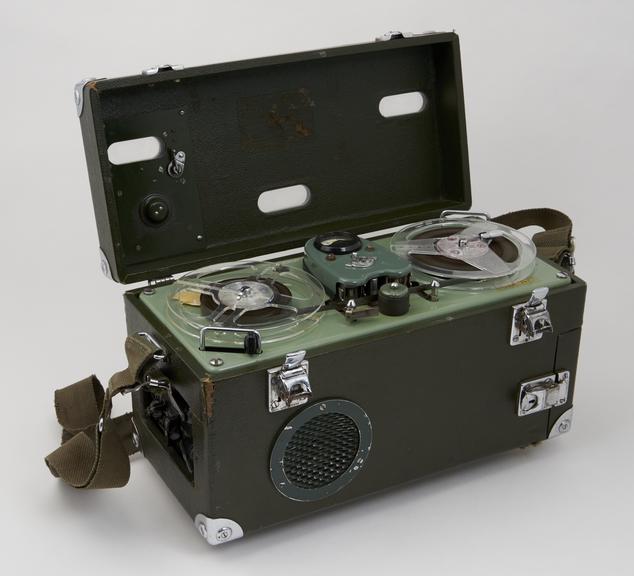 EMI midget tape recorder (serial no. 1253) (c. 1950)
Science Museum Group
© The Board of Trustees of the Science Museum

The EMI midget tape recorder was developed through a partnership between the BBC and EMI in order to produce the first practical, portable reel-to-reel magnetic tape recorder that was capable of being used in the field with only one person to carry it. The EMI midget was considered relatively portable and lightweight even though it weighed 14lbs or 6.5kgs. This version used radio valves (vacuum tubes) but later versions used transistors to reduce weight and increase battery life.

The EMI midget recorded at 7 1/2ips on five-inch spools (holding 15 minutes). It had no erase head so it was vital to use clean tape - more than one producer failed to pay attention to this point and brought back an unusable recording as a result.

EMI reel-to-reel tape recorders were lightweight battery operated recorders designed for applications where extreme portability was needed, especially outdoor recording. Some of their early examples such as the EMI 'midget' recorder were designed in conjunction with the BBC and regularly used by the BBC and other radio stations throughout the world.

The performance of these recorders was such that they could be and were used for high-quality, professional recording of speech and music associated with interview, television or film works.